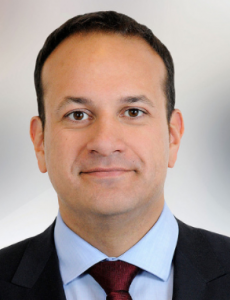 Let’s start with a silly statement, shall we? There’s never been a Taoiseach like Leo Varadkar. No, I’m not suggesting that former Taoisigh have been secretly gay or of Indian parentage. I simply mean that since no two human beings are the same, so no two Taoisigh are the same, and when people go on about Leo being gay and of Indian parentage, they’re simply slapping themselves on the back for being so brain-numbingly liberal and free from prejudice .

So let’s skip the gay bit and the Indian bit and concentrate on the essentials, shall we? Like what Leo has to say about stuff.

A few weeks back, Leo told unionists they’d be beyter off as part of the European customs union. That’s like telling your granny she’s not doing her insides much good, sipping on that glass of paraffin. Anyone with half a brain-cell would know that being inside the customs union would be a better place to be than outside it. Not even Brexiteer unionists  really believe Brexit is a great idea: they just have this drug-like vision of Great Britain circa 1900, with Belfast making ships (many of which didn’t sink) and taigs knowing their place. They don’t need Leo to tell them how obtuse they are. In their tight little hearts, they know that aching truth already. Nor do they need Leo to tell them that if the entire UK stayed in the customs union, there’d be no border problem. And if we all had yachts we’d probably go sailing.

Leo also had something to say about our absence of an Executive:

“We need the executive, the assembly, the North South Ministerial Council and the British Irish Council up and running and acting in the interests of our people.”

Bet you’ve noticed the different with no North-South Ministerial Council, not to mention the British-Irish Council… What’s that? You don’t know what they do? And you suspect it’s not much? Pshaw. Wash your mouth out with carbolic soap.

As for the Executive and the Assembly, Leo no doubt has in mind the importance of the north’s “voice being heard” on the crucial subject of Brexit. Like, we don’t know where the north stands on Brexit. We didn’t have a referendum where a clear majority here told Boris and Nigel to stuff their Brexit where Martina Anderson has suggested. And of course, the fact that Wales and Scotland have functioning assemblies has caused Theresa May and her merry Brexiteers to pause and think: how will all this affect our dear neighbouring parts of the UK?

So yes, I do think Leo is unique. He’s got a Dublin 4 smoothness and effortlessness that’s miles from the plebian charm of Bertie Ahern or the Mayo gwan-ye-boy-yehness of Enda. But much of the time he appears to think along tracks that a blind man after a night in the pub couldn’t miss.