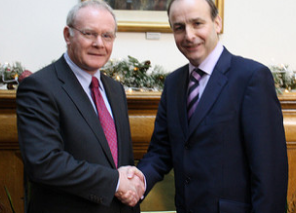 There’s something boyish about Micheal Martin. Press photographs of him tend to show a bright-eyed figure smiling a little shyly – a daycent man, you might say, having looked at the photograph for a minute or two. A man with the welfare of others at heart. In many ways like his fellow-Corkman and former FF leader,  Jack Lynch.

But when it comes to words, the smiling choir-boy tends to transform into a hob-nailed bovver boy. Someone who has no compunctions about calling you every name in the lexicon and finishes by planting a knee in your softer parts. All in a good cause, of course.

Yesterday Micheal was explaining to anyone who’d listen to him the true nature of Sinn Féin. It appears they are not, after all, a normal political party – they are “cult-like” (no, Virginia, I said “cult-like”) and they do not tolerate dissent. What’s more, Gerry Adams and Eoin O Broin are “strong apologists for the most heinous crimes of the IRA”. This relates to the killing by the IRA of Louth farmer Tom Oliver several decades back.

Now, my dictionary tells me an apologist is “a defender, supporter, upholder, advocate“. In relation to the death of Tom Oliver (who, the IRA said at the time was an informer) I don’t remember either Adams or O Broin saying they defended, supported upheld or advocated the killing of Mr Oliver. I did hear them say that it would be pointless to mount prosecutions against those who allegedly killed him.

That makes sense to me. If we are to have prosecutions around the deaths of all those who died during the Troubles, it’s going to take a very long time. So it might make sense – if we think prosecutions are a good idea – to start with mass killings. That’d mean prosecutions and maybe final justice to the Families of the Forgotten – the loved ones of those blown to pieces in the Dublin-Monaghan bombings. Next in line might well be those who shot dead fourteen civilians on the streets of Derry. And maybe the Glenanne gang, who killed dozens of innocent people, details of whose activities Micheal can read in Anne Cadwalladere’s book Lethal Allies.

While it’s encouraging to see Micheal embark on what appears the pursuit of justice, it’s hard not to suspect that the Fianna Fail leader is championing a carefully selected victim who will provide the maximum political return. Which, if it’s the case (and indeed  yes, Virginia, it does  walk kind of like a duck etc), the smiling ladeen from Cork begins to look more like a smirking opportunist, carefully seeking out among the dead those who will match best with his party’s nourishment and growth  – or, alternatively, the starvation and stunting of his party’s opponents.