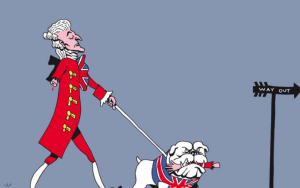 I remember Golda Meir. At the time she was the Israeli president, she was doubtless loved by many Israelis. And I remember Margaret Thatcher, who had her band of  devoted disciples. But circumstances drove both women into retirement, Golda declaring “It is beyond my strength to continue bearing this burden”,  Maggie with the tearful observation that “It’s a funny old world.” Today, Theresa May could do worse than start composing her final words.

Like Thatcher,  like the DUP’s Arlene Foster, Theresa insists that she will go on leading her party. It’s obvious from her disastrous election that her grip on the leadership role is feeble. By calling the election, she’s managed to reverse the position of the Tories and Labour in the polls: the Tories had an embarrassingly large lead, Labour looked as if it was heading into forty years in the wilderness. Now the Tories are well behind in the polls and Labour is strong and getting stronger by the day.

Theresa’s reaction? “I’m in this for the long term. I’m not a quitter.” Alas, the leading economists at the financial firm Morgan Stanley have had a look at the books and beg to differ.

Say what you like about Morgan Stanley but they know how to state Britain’s economic problem in stark, compressed terms.

So here: hands up if you think Theresa May will win that “early election”? Right. And will that leave Arlene Foster’s Brexiteer party looking clueless and unloved? Don’t answer that.

Sometimes, in politics and elsewhere,  it’s hard to be a woman.