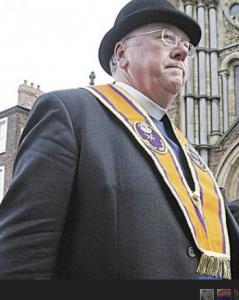 The year 1912 has always been a difficult one for unionist politicians. On the one hand the Ulster Covenant has entered the sacred temple of unionism, with hundreds of thousands signing it and swearing to resist the rest of Britain which voted for them to be part of a united Ireland. A noble and courageous act by unionists of the day, then, with the cherry on top the bit about some signing  the Covenant in their own blood.

On the other hand, the year 1912  shows clearly that unionism doesn’t believe in democracy, not even British democracy. So we had the Gilbert-and-Sullivan craziness of unionists preparing to fight the British government to show how loyal they were to Britain. Pass me the smelling salts, Winifred – my head is swimming.

And 1912 was the sharp stick on which poor Mervyn Gibson, that man of God and Grand Secretary of the Orange Order, found himself impaled  in a recent interview. He said he’d accept the democracy of a united Ireland if that’s what the people of the north voted for; but he said the UVF gun-running of the early twentieth century was “of its time”. (No, I don’t think you’re meant to understand what “of its time” means. Maybe “Everyone was doing it then”?) Marvyn also said he thought the UVF of the time weren’t terrorists. “It was a community seeking to defend their position within the United Kingdom and they did.”

I recently interviewed a man for a book I’m working on and he made a remark that caused  my heart to leap with joy, for it’s a position I’ve held myself for some time. In brief, this man said  he had met very very few pacifists during his life, and he pointed out that the Churches, including the Catholic Church, have always glided away from Christ’s precept about “Thou shalt not kill”. And he recalled the time of the Vietnam War, when Cardinal Spellman sprinkled holy water on the US troops going out to kill in Vietnam.

The fact is, a lot of people – including, I suspect, dear Mervyn – want it both ways. They want to be able to express horror at political violence such as that carried out by the IRA, but they also want to be given a free pass for political violence carried out by British forces or American forces or unionist forces. How often did we hear Tony Blair and Bill Clinton admonish us to abandon violence and take a purely political path to achieve our goals? Highly commendable, except that both Tony and Bill sent thousands of young men to kill and be killed, often thousands of miles from their homes. Did they see the contradiction? Perhaps. Did the Catholic Church see the contradiction? Perhaps. But neither the politicians nor the Church uttered a squeak to suggest that violence was wrong and force should be renounced by everybody as a means of achieving political goals.

So no, I don’t blame poor Mervyn for lauding the UVF, even though he is a Christian clergyman. He’s just part of the massed clerical ranks who base their faith on the Ten Commandments but are happy to bless the achievements of those who slaughter or threaten to slaughter.

Then again, maybe I just don’t understand the Ten Commandments. Maybe that fifth one about killing is in fact an optional extra. Mervyn probably knows.

View all posts by Jude Collins →
I think I’m in love with an iPhone
The RHI: the scandal that no one likes to mention