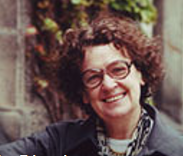 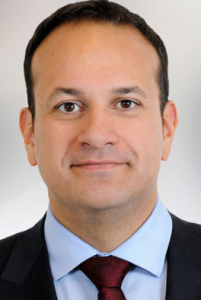 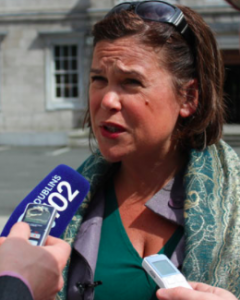 Well. Mary Lou McDonald is coming in for her fair (or maybe unfair) share of criticism these days. First we had Ruth Dudley Edwards fretting that Mary Lou had had “an expensive education” and that somehow that wouldn’t go down well in South Armagh. Ruthie can point out this class gap because of her own humble background and education. She attended University College Dublin where her father scraped a living as the Professor of History (No, Virginia, he didn’t give her a lift to UCD on the bar of his bike). Then she studied at Girton College, Cambridge and Wolfson College, Cambridge. As far as I know, Ruthie has no plans to visit South Armagh.

But the Professor’s daughter is not the only one who’s been sticking needles in Mary Lou’s effigy. In a Dail debate, Taoiseach Leo Varadkar got a bit tetchy when Mary Lou pointed out that there were hundreds of children in emergency accommodation and that Leo and his lieutenants hadn’t lifted a finger to help them. Leo didn’t like that and compared Mary Lou to Marine Le Pen, the right-wing French politician, “because she always goes back to her script”. He also accused Mary Lou and her party of opting out of government in the north and south – a slightly odd charge, since most of the southern parties, including Leo’s, have for years been insisting they’d never consider coalition with Sinn Féin.

I don’t want to intrude on Mary Lou’s grief – no doubt she’s at home sobbing helplessly after the Taoiseach’s comparison – but I don’t quite get that script thing. I didn’t see the Dail debate but my memory is that Mary Lou tends not to speak from a script, and I have a suspicion neither does Marine Le Pen. But maybe what Leo meant was that Mary Lou’s political thinking was similar to the French right-winger. If so, I’m still baffled, since the Shinners are frequently criticized for being too left-wing by proper respectable parties like Leo’s and Micheal Martin’s. Maybe he meant Mary Lou keeps returning to an issue when it hasn’t been addressed? I’d have thought that was a virtue, not a flaw.

My suspicion is that Leo just wanted a headline that’d couple Mary Lou with a toxic politician, and since Mary Lou is a woman and so is Marine Le Pen, sure why not. Never mind if the comparison stands up: the key thing is to lob it into the public consciousness.

Donald Trump is very good at that kind of thing: send out a tweet that links Kim Jong-un with a Rocket Man, ties Ted Cruz with lies, or Hillary Clinton with prison. The headlines are created, the job done. It may not be grown-up politics, but it goes down a treat with the knuckle-draggers.

And no, Virginia, Leo is not like Kim Jong-un. They may both have slightly chubby faces but their hairstyles are quite different.

View all posts by Jude Collins →
Nicola was just one plate at the Killough banquet
Simon Coveney: he’s a team player, right?