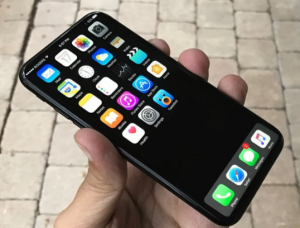 I have always loved gadgets. It’s clearly a sign that I’m emotionally immature, lacking in feeling for humankind, happier interacting with a lump of metal or plastic than with a human being. That’s probably why I have a blogsite: I talk to my screen rather than having to eyeball men and women. (And yes, Virginia, the fact that you’re online reading this blog means you’re a bit that way inclined as well.)

I blame my father. He loved gadgets too. At a time when electric shavers were in their infancy, he bought one and took huge delight in demonstrating its powers to fellow cattle-dealers when they called at the house. When they asked “Aye, some yoke right enough, Paddy – but where does the shaving soap and water go in?”, he would almost split his face with smiling as he shouted “It doesn’t need soap and water!”

It runs in the genes. When my brother came home on holiday from New Zealand, he brought as a present for my father a watch that didn’t need winding. As if to prove it was superior to other out-dated watches, it gave off an audible hum, no doubt filling the house with deadly radioactivity.

And I’m as bad. I have a modest iPhone 5, bought on eBay; but don’t bet against my breaking the domestic bank and eventually getting the spanking new iPhone X, launched with such fanfare yesterday.

Apple have to be the world’s biggest showmen – not quite snake-oil salesmen, but they do tend to overstate their case. The company has declared that with the various iPhones over the past ten years, it has changed human history. I mean, come on, guys. It’s a smart phone, not a cure for cancer. In fact, didn’t somebody say all that jamming a phone to your ear sent radioactive waves into your skull, doing terrible things to any brain-cells it might encounter?

Apple is also heavily into thought-control through its use of language. It has declared that its famous glass-and-chrome stores won’t be referred to as stores any more, they’re to be “town squares”, because they don’t just off-load iPhones and other Apple products, they are places where people come and learn how to use these products. Yes, Virginia, I agree: they’re still bloody stores where you pass over big money; the rest is frippery.

One of the big selling points of the iPhone X (don’t tell grandma but it’ll cost £1,000) is that it will have “wireless charging”. Simply put, this is a lie, and a lie which many newspapers have colluded in. The iPhone X is charged by placing it on a pad which in turn is plugged into the wall. The fact that you put your iPhone X on this circular mouse-mat affair doesn’t alter the fact that the mouse-mat has to be plugged in. Wireless charging Tim Cook’s arse.

But despite the language-mangling, there is one feature of iPhones that is undeniable: they are things of beauty. I used be fuzzy about the concept of design – what was it, did it mean anything to say one design was good and another wasn’t? It all seemed so vague and engineery. Then I saw an iPhone. Took it in my hand. Felt its smoothness, its elegant simplicity, its…well, dammit, its beauty. There’s no other word for it.

I know they’re all made by seven-year-old semi-slaves in Taiwan sweat-shops. I know they’re wildly overpriced, and as soon as you summon up the financial nerve and buy one, it’s immediately outmoded by a new model that’s launched the next day. I know they’re now so big, the only place you can put them is in your hip pocket, from which they will inevitably fall, or be crushed, or be pinched. I know we in the developed world ogle such things while more than half the world picks through trash-heaps in the hope of finding something to fend off starvation. But what does all that matter when you’re in love?

Which is why I’m now sending out the call to my nearest and dearest: Christmas is less than four months away. And in the deathless words of the Big Bopper, you know what I like.

View all posts by Jude Collins →
Have you heard the one about the Red Hand Commando?
The Rev Mervyn Gibson, a man seated on a cleft stick