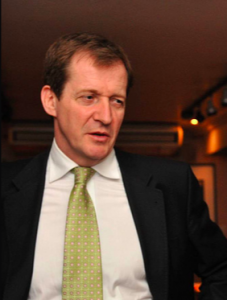 I don’t know that I’d agree with Alastair Campbell on everything. For a start, Peter Capaldi’s caricature of him as the foul-mouthed  Malcolm Tucker in The Thick of It is unforgettable, partly, I suspect, because it has a strong core of truth. And I’m not overly impressed by the fact that he couldn’t bring himself to shake the hand of Gerry Adams or Martin McGuinness when they first met at 10 Downing Street, even though his boss Tony Blair had no such problem.

He does it (check the link) by devising a speech for Theresa May. In the speech May says what tens of thousands of us have believed for a long time: Brexit simply won’t work.

Precisely because I have a profound sense of duty, I want to tell you the absolute truth as I see it. It cannot be done. Yes, you can shout. You can storm out. But I have looked at it every which way. And, as your leader, I have concluded that it cannot be done without enormous damage to our economy, to your living standards, to our public services, to our standing in the world. This is damage I am not prepared to inflict. The cost is too high.

What about democracy? Well, the best kind of democracies are those where informed citizens make choices. The people of the UK clearly were misinformed, the famous £350 million a week for the Health Service courtesy of Brexit being only the best known of the Brexiteer lies.

In the fictitious speech, May comes out clearly as anti-Brexit to the point where she feels she cannot implement it. In real life, of course, she’ll never say any such thing.

So what to do? Here’s what: the British Labour Party should commit itself to supporting Remain. The EU has plenty of faults but you’re not going to reform it if you opt out of it. The EU also has plenty of benefits, and the Labour Party should be capable of seeing them. It should declare itself as firmly Remain, a fresh General Election should be called with Brexit at its heart, and I’m confident even the dumbest of British voters would see the direction  May is driving us all and would throw her first off the bus, then under it.

There’s no other way. As individuals, we sometimes make daft decisions and, having realized our foolishness, we try to reverse what we’ve done. The same applies to democracies. Because the people spoke over a year ago doesn’t mean they’re not allowed to speak again.

He may not be the most loveable of people but Alastair Campbell has done us all a favour by speaking the truth about the deepening dung-pool we’re being forced to wade through.

View all posts by Jude Collins →
Sheena Campbell and a hurricane of pain
Phil, Leo, Micheál and Jeffrey do some senior hurling