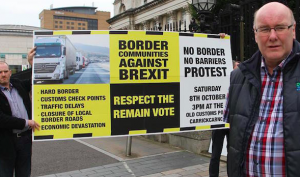 It’s odd the way people sometimes don’t see the connection between things. I remember a man who smoked thirty cigarettes a day. Every so often he would have a violent coughing spasm which’d go on for a minute or two. He’d then wipe his eyes and mouth, reach in his pocket and light another cigarette. “Ah, that’s better,” he’d say.

Something similar obtains with regard to the Irish border. Before Brexit was announced, there used to be much clucking and finger-wagging among the authorities and commentators, particularly about people who smuggled stuff like cigarettes and fuel. We were encouraged to see these people as low-life cheats who richly deserved exposure. They were cheating the UK Treasury and therefore cheating all of us who pay taxes.

I’m not sure my Auntie Peg would have agreed with them. Back in the dim post-war days, she made frequent trips across the border, never returning north without at least a pound pot of jam concealed in her voluminous knickers. She was a moral, upright woman, but she’d have told you to get lost if you dared criticise her smuggling forays. “Would you rather have no jam, for your bread, then?” was her implicit response.

Most smugglers find moral questions about their activities a distraction; they’re totally focused on getting the stuff across without detection. If you asked them, they’d probably have said they didn’t ask to have a border erected, but since it had been, they were going to make use of it to put bread (probably smuggled as well) on the table.

But as we agonise about a soft border and a hard border, about an invisible and a manned border, a land border or one in the Irish Sea, no one seems to make the connection: smuggling of goods or people happens because the border is there, just like the coughing man’s ailment existed because he smoked so much. Remove the ciggies and his coughing would very likely have improved. Remove the border and at one bold stroke you’ve put every smuggler, from vast fuel tankers to jam-in-the-knickers, out of business. Simples.