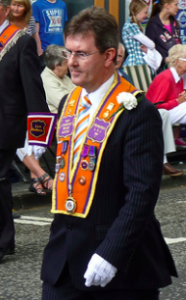 It’s always interesting when two different parties insist that their version of things is true. Since in the case for consideration both parties can’t be right, it’ll be interesting to see who proves to be either ill-informed or a liar.

The Financial Times via the Daily Telegraph says that the £1 billion – or was it more? – which the clever DUP screwed out of the Tories as the price for propping up Theresa May’s sad government – that £1 billion will not be available until Stormont is back on its feet or direct rule from London has bee formalized.

George Orwell always claimed that when politicians used polysyllabic words, it showed their thinking was muddled or they were lying. Jeffrey can be accused of many things, but clarity on this matter is one no one can leave at his door.   Why did Jeffrey not just say “We’ll get that £1 bn on Thursday”? Or Saturday or whenever. Instead of all that “separate appropriations” stuff? After all, the DUP was promised this sum months ago for its willingness to hop into bed with Theresa and her rag-bag Cabinet. What’s the delay? It’s not as if it’s not needed. So Jeffrey old thing, enough with the obfuscation. Just.Show.Us.The.Money. That, or admit you and your party have been put in a black polythene bag labeled “Suckers.”

View all posts by Jude Collins →
The life and times of Regina Doherty
So tell me: how do you feel about a border poll?