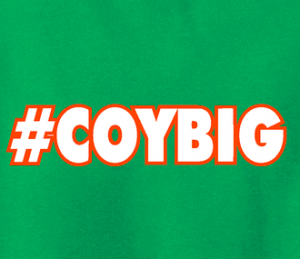 Aw here. We let ourselves down last night. There was any number of players on the Ireland team who were really English – did you not hear their accents when interviewed? And how many of them sing our national anthem? Plus the manager Martin O’Neill is from Northern Ireland AND has an MBE.

So what am I saying? I’m saying we should be ashamed of ourselves – not a single death threat delivered. Yeah sure, that might have meant we wouldn’t have made it to the play-offs, but there are some things more important than sport.  The least we can do is plan for a pure Ireland team in the future and maybe learn a few anti-England songs. Didn’t hear one last night.

Still, we are where we are. Probably like you, I watched the whole game and for the first twenty minutes or more the Wales team played us off the field. It was embarrassing – at points our players could have gone off and had a cup of tea and a fag, for all the difference they made. In the final minutes of the first half we began to get a grip on ourselves, and while the manager may be from Northern Ireland, he did an OK job of team selection and organization.

And then in the second half, we did it. OK, the Englishman Harry Arter sold the dummy from Jeff Hendrick’s cross  and that bloody northerner McClean was the one that hit it into the bottom corner of the net, but they all count. We’d scored. After that you knew we’d dig in and repel all boarders.

But while we are where we are – in the play-offs – we really should start planning for the future and weeding out the Englishmen on our team.  You don’t see Irishmen on the England team, do you? Yes, I know there’s a granny rule but there’s such a thing as self-respect. Better a team composed of Irish players from Dundalk and Shamrock Rovers than this mongrel outfit that’s looking as if it might get to the World Cup finals. If we do, we’ll be the laughing stock of the world again.

What’s that? No I don’t know the words of Amhrán na bhFiann … What do you take me for – a fanatic?

View all posts by Jude Collins →
Here comes Brexit. Hang onto your hat
Harvey Weinstein and James McClean: how we hate them