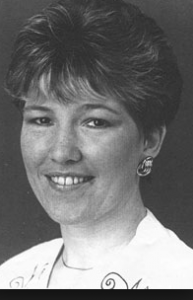 For most of us, today is just another gusty Autumn Monday, our main concern maybe the approaching Hurricane Ophelia. But for one group of people, today is a day that cannot be other than sad and dark. For on this day twenty-five years ago, Sheena Campbell, then a 29-year-old law student at Queen’s University, was shot dead by a UVF gang.

She was killed in Botanic Avenue, near Queen’s Library where she had been studying earlier in the day. She was from Lurgan and was a Sinn Féin activist. From the day she began her studies, Sheena was harassed by RUC and British army patrols. Shortly before her death she mentioned this to some fellow-students.

The slowness of the police response to her killing, the ease with which the UVF death squad moved in the heavily-populated Botanic Avenue, suggested yet another example of collusion between the ‘security’ forces and her killers.

Why was she killed? Because she was a member of Sinn Féin. That’s the republican political party which was responding to  the urgings of the British and Irish governments, by adopting the political route towards achieving objectives. But in those days, to be a member of Sinn Féin meant you were a potential target for assassins. And of course Sheena Campbell was an intelligent young woman, which made her even more of a threat. As Gerry Adams remarked on the news of her death “To her killers she was a nationalist who refused to stay in her place and to accept she was a second-class citizen.”

For most of us, Sheena Campbell is just another name, another faceless victim. To her family and her friends, she was a unique, irreplaceable human being, full of energy and smiles and potential. All that was snatched away from them this day twenty-five years ago, leaving them with the pain that never dies.

So as you hunker down for the duration of today’s storm,  count your blessings. You won’t have to weather the storm in your heart, the memory of bright courage and ability, of a life brutally snuffed out. Sheena Campbell’s existence should have gone on for another twenty-five, fifty, sixty years. Today her family and friends will feel the fresh wound of her loss. Her name will not be on the lips of Micheal Martin or Leo Varadkar or Enda Kenny: Sheena wasn’t a useful victim. But her loss twenty-five years ago today was one that diminished us all.