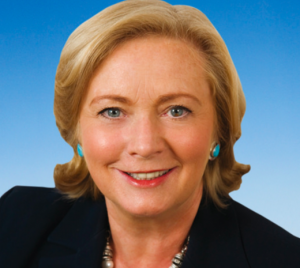 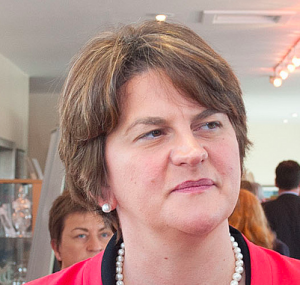 On the face of it, there’s not much resemblance. Frances Fitzgerald is older, I would guess, than Arlene Foster. Where Frances is generally pleasant and smiling, Arlene’s default expression is that of someone who’s just swallowed a wasp and is trying not to think about it. Frances Fitzgerald is Tanaiste and comes from that party, Fine Gael, which has as its great hero that man of violence, Michael Collins. Arlene was First Minister and  is the leader of the DUP, which since it doesn’t believe in violence doesn’t have a violent hero. I think.

But there are parallels. Frances Fitzgerald is causing the political ground in the south to tremble beneath the feet of politicians and population alike. She’s been accused of sitting on an email since a year or two back, when she could have used it to challenge the persecution of Garda McCabe by his superiors. She says she forgot she got it, and anyway it said she should not do anything. She’s been urged to resign or else for the Taoiseach to give her the boot. She won’t and he won’t. Sin é.

Arlene Foster has caused the political ground in the north to tremble beneath the feet of politicians and population alike. She’s been accused of setting up and running, at disastrous cost, a renewable heating scheme which paid people handsomely for adopting the scheme which was costing the taxpayer hundreds of millions of pounds. There have also been accusations of corruption coming from within the DUP.  Nearly a year ago Arlene too was urged to resign, or at least to step aside as First Minister while investigations were conducted. She won’t. Sin é.

It’s difficult to see how Frances Fitzgerald was fault-free in the McCabe case. But though the political skies may fall and send voters to the polls in the mouth of Christmas, Frances so far is hanging tough.

It’s difficult to see how Arlene Foster was fault-free in the RHI scandal. But though it has meant the collapse of Stormont, Arlene still refuses to budge.

Both women have shown an odd interpretation of the notion, one which  politicians like to popularize,  that they’re there to serve the people. It would appear that in both cases, only some of the people were being served, and truth and integrity has been sent on a long vacation.

In a normal society, both women would have been out the door within ours of the charge. But then our two societies, north and south, have never been near to normal.