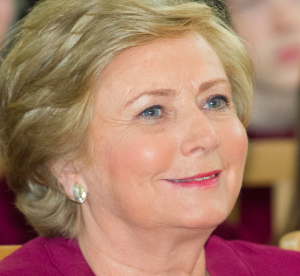 I’ve just had the most terrifying thought:Frances Fitzgerald could condemn Ireland, north and south, to years of economic hardship. With, of course, a little help from her friends.

As causes for having a general election, Frances is a straightforward case: she had information about the smearing of Garda McCabe the whistleblower.  She says she was told she couldn’t use it, then she forgot she’d got it, and now her boss Leo Varadkar says she’s done nothing wrong.

Nothing wrong. Sound familiar?  That’s because those are the two words Arlene Foster (who set up the cash-for-ash scheme) used when she was urged to step aside as First Minister while the heart-attack-making abuse of public money was investigated. Me step aside? Sure all I did was set up and see the scheme was maintained. What’s wrong with that?

Likewise Frances. Sure all I did was get an email that told me what was happening to the unfortunate Sergeant McCabe. How could I act on that when I was told I shouldn’t/couldn’t? Besides, I forgot about the whole thing until the day before yesterday. Obviously I’ve done nothing wrong.

Arlene is now promoting the line that the Stormont Executive has been collapsed for no good reason and should be resurrected immediately. Leo Varadkar is saying there should be no general election, baby it’s cold outside, and what would anyone want to plunge the country into a general election for, over a piddling detail about a Minister who’s done nothing wrong?

Except it comes down, as David Cullinane said yesterday, to a simple matter of politicians being held accountable for their actions. Arlene doesn’t appear to see any need for that, and castigates those who would say it does matter. Likewise Frances: nobody  likes tramping from door to door with a biting wind going up their trouser leg; but when people show incompetence, or gross forgetfulness, or cover up,  then you have to say that there should be consequences. If there aren’t – if Frances’s little moment of forgetfulness isn’t addressed – that’s a signal that in politics, anything goes as long as you can brazen it out successfully and point to the other guy as a maker of unnecessary trouble.

The thing is, Frances looks so wide-eyed an innocent, you’d think she’d pass out at the thought of an innocent man being harmed. But then there are those who’d say Arlene is a grand wee girl from Fermanagh that’s just doing her best for our wee country.

And how is it that Frances could plunge all of Ireland into economic hardship? It’s Brexit, dear boy, Brexit. If Leo’s fighting for his political life, he’s going to be a wee bit distracted from uniting with the other EU countries in telling Theresa and David and Co that Ireland isn’t going to take this magic invisible border shit any more.

View all posts by Jude Collins →
Saturday pic of the week
Leo and Micheal, up there and just a bit scared