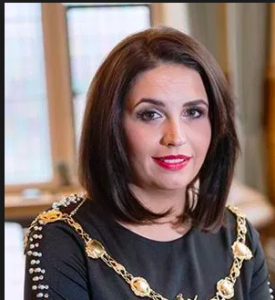 In a few hours’ time I’m due to go on Nolan Live (BBC NI) to discuss Elisha McCallion’s ‘glorification of terrorism’ , as Arlene Foster has described the Derry MP’s Ard Fheis speech. Since I didn’t see it on the televised Ard Fheis, I thought I’d better listen to it online.

I was surprised.  It’s a speech that lasts just over seven and a half minutes,  with just two statements/phrases which might be contentious.  Combined, the two occupy approximately  five seconds of the seven-and-a-half minute speech.

The first statement of Ms McCallion which received warm applause from the Ard Fheis audience was “Martin McGuinness was a proud member of the IRA”. Mmm. Not sure that’s something that’d make me clutch my chest and swoon to the floor. After all, McGuinness during his life repeatedly said that he had been a member of the IRA and that he was proud of the fact. No ifs, buts, maybes. And despite this refusal to condemn his own past, three DUP leaders worked with him in Stormont, some  more productively than others. Two of those three DUP leaders attended his funeral, with the present leader warmly applauded for doing so; and the third DUP leader developed a genuine friendship with this man who had been in the IRA and was proud of the fact.  Odd that being reminded of her erstwhile political partner’s unrepentant past should upset one of them now.

The second statement which received thunderous applause was Elisha McCallion’s borrowing of a phrase she said McGuinness himself used: “Up the rebels!”  It has a slightly old-fashioned ring to it, that. And there was a certain old-fashioned quality in McGuinness, among his many other qualities. What does “Up the rebels!” mean, that it is heard as “a glorification of violence”?  It indicates that the person using it is anti-authority, identifies in this case with those in Irish history who have rebelled (usually unsuccessfully) against British rule in Ireland. Or maybe even unionist rule. In fact, you could say that the civil rights protestors in the late 1960s were rebelling against a sectarian state which sought to subjugate them. It certainly would cover the many risings against British rule, from the United Irishmen to the Fenians to the Easter Rising.

Was it intended to cover identification with the IRA in the course of the most recent Troubles?  Probably. Mao Tse Tung said “The guerrilla must move among the people as a fish swims in the sea”.  Of course the IRA had the explicit or implicit support of the communities from which it came – if it hadn’t it wouldn’t have lasted twenty-five minutes, let alone twenty-five years. As Eamonn McCann is alleged to have said at one point: “The wee woman in the Bogside who voted religiously for John Hume had an Armalite under the bed.”  And I expect the same could have been said, at least to some extent, about loyalist paramilitaries. I think most unionists would accept – or even insist – that Sinn Féin republicans would have seen the IRA as a justified fighting force against RUC  attacks such as that on Derry civil rights marchers on 5 October 1968, or the RUC beating in his own home that led to the death of Sammy Devenney in 1969, or the attacks by the British army in Ballymurphy in 1971 and in Derry on Bloody Sunday in 1972. You don’t witness slaughter like that, of your own family or friends or neighbours, without developing a fairly strong sense of  the need to fight back or identify with those who do.

So why did Arlene Foster express horror at what she insists was a glorification of terrorism, rather than a fulsome tribute to a dead leader? I mean, she knew all these things I’ve listed above – and yes, like many others, her family suffered in the conflict. But I’m going to go out on a limb here and say her sense of horror was less the product of genuine disgust and more of a desire to get people to look at something else, anything else, rather than at the quicksand which she and her party have landed themselves in, carefully chained to their Tory  masters. And yes, Virginia, the quicksand has a name: BREXIT.

View all posts by Jude Collins →
OMG! He’s going away!
L’esprit de l’escalier and five things to think about after Nolan Live