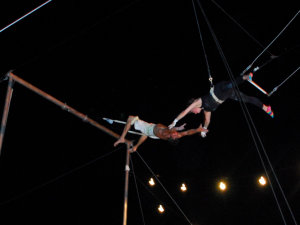 It’s quite good fun watching politicians on the swinging trapeze, risking everything in an attempt to impress the audience. South of the border for the last couple of days, there’s been some dazzling risk-taking.

Not that politicians want to risk any more than necessary, ever. But Frances and the Whistleblower is a story that has popped up and put everything up there, with no safety net.

Fianna Fail and Fine Gael are the two big risk-takers. While Sinn Féin has tabled a motion of no confidence, it’s Leo and Micheal who are clad in the trapeze-artist tights. Leo says his Minister Frances is a fault-free woman; Micheal says she must go. Squinting up at the spot-lit figures, it’s hard to see how one of them won’t come plummeting to earth. Or both, because they’ll both be blamed for yapping in people’s ears about the need to Vote the Rascals Out, when all the public wants to do is figure out who they still haven’t bought a Christmas pressie for. The extent to which the public hate general elections is normally exaggerated. But this one does look like a stinker, if it comes to pass.

Judging by the way both Leo and Micheal have begun to hedge their bets, with today’s the-last-thing-any-of-us-want-is-an-election talk  suggesting that they are looking for a safety net and a reason to call the whole thing off.

But they must call it off together. If Leo goes for the safety net first, Micheal will look like the tough Cork boy; if Micheal heads for safety first, Leo will ripple his muscles beneath those trapeze tights and smile as only a well-bred boy can.

But my guess is, they’ll both devise a form of words or a cunning plan that will get them out of this scary high-wire stunt, at least for now. Fianna Fail are beginning to realize they’ve got maybe a bit too close to the FGers, and it’s time to start edging away. A Spring election would suit them a lot better: they have Fine Gael dangling dangerously up there, but next Spring, with the EU border thing somehow sorted, would suit them much better. No one wants to be labeled the eejits who took their eye off the border ball.

I could of course be wrong. I often am. But then so are most commentators, including the most highly paid. Still, my guess is that Leo and Micheal will somehow descend to safety, both claiming that they’ve preserved their honour and saved the state as well. Because a Christmas election kick-in-the-teeth is a present no party wants to be on the receiving end of.  For Leo such a kick could knock the honeymoon stardust off his leadership. For Micheal it could prove fatal.

View all posts by Jude Collins →
Frances Fitzgerald: the woman with her finger on the button?
Royal non-racism and that bad Chris Hazzard