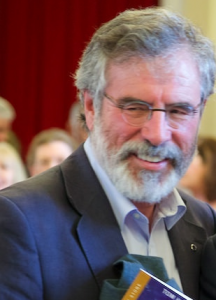 OMG. It’s a crisis. A huge crisis facing as many as ten people in places like London, Belfast and Dublin 4. Grandchildren are hugging their mothers’ skirts and pleading “Mummy, why is Granny Ruth trying to pull out her hair? Why is Uncle Nelson trying to stick needles in his eyes?” For this morning in more than one household, there are fears that the breadwinner will no longer be bringing home the bacon.

Of what do I speak? Why, last night of course. After years of being abused, caricatured, vilified, Gerry Adams has declared that he will not run again for the Dail or anywhere else. He’s stepping down. So the bleak question facing so many of our intelligentsia scribblers is, what will we do, now that we haven’t Gerry to mock?  Yes, of course we’ve spent the last ten years demanding that he go – but that was only part of our general assault on him!  It’s a bit like campaigning for Brexit. Not even Nigel Farage actually wanted it to happen.

To which I say, cheer up, chaps. The model is to be found north of the border. When Michelle O’Neill replaced Martin McGuinness, the beady-eyed character assassins declared that O’Neill was only a front, the one making the decisions and running the show was really Gerry Adams. So all they have to do is broaden their canvas. Yes, Gerry will be gone, but he won’t have gone away. Whoever replaces him as president of Sinn Féin will be just a front. It’ll still be that terrible man with the beard and teeth running the show, flouting democracy and forcing his will on an unwilling party.

But here’s the thing. Is the entire Sinn Féin party suffering from Stockholm syndrome? Because when Gerry announced his retirement at the Ard Fheis last night, there wasn’t just appreciation for what he had done. There was admiration, there was veneration, there was laudation, there was – as Toiréasa Ferris who introduced him said – there was love.

You don’t lightly let go of a leader who has started from minus zero and built a party that has half a million followers, seats in Belfast, Dublin and Brussels and virtually every council in Ireland, and is still expanding. There was more than the occasional damp eye as Gerry Adams and Martin Ferris gave a fisted salute to an adoring audience.

But please. Don’t focus simply on that vivid scene. Spare a thought for the garment-rending and teeth-gnashing that sounds from so many hacks’ homes in London, Dublin and Belfast this morning. Once political commentary was so easy, you just picked from 1.001 reasons to recoil from Gerry Adams. Now – oh horror! – they may be forced to think.

Come back, Gerry. It’s because we hate you that we’d love to have you back.

View all posts by Jude Collins →
Gerry and Leo: are they at peace with themselves?
Glorifying terrorism and that sinking feeling