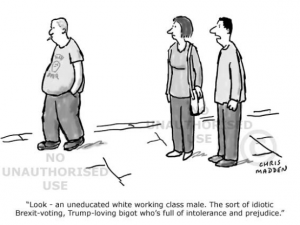 Almost forty years ago, when I returned to Ireland from Canada in 1979, some Canadians I knew were open-mouthed in astonishment: they’d always known I was stupid but not this stupid. Lord Mountbatten had just been killed in an explosion on his boat off the Donegal coast, eighteen British soldiers had been killed at Narrow Water – was I crazy? I tried to reassure them by pointing out that I was still more likely to be involved in a fatal car-crash than caught in the cross-fire. Looking back, I can see now that what I should have said was “It’s OK, I’m going to be living in a middle-class area.”

That’s one of the features of the Troubles which has got considerably less attention than others: the fact that those who bore the brunt of the Troubles on both sides were working-class, and that killings, by and large, happened in working-class areas. Maybe that’s because matters of class run so deep in our society we can barely see them. Give yourself a test: if you’re a unionist/Protestant, would you rather your daughter came home telling you she was moving in with and planning to marry a nationalist/Catholic barrister, or that she was planning to marry a unionist/Protestant bin-man? And vice versa? I think we all know the answer.

And it’s not just in this corner of the island. There’s a new housing development being built in that most prestigious of Dublin areas, Ballsbridge. The developer in such cases is supposed to provide 20% for ‘social housing’ – this in an apparent attempt to bring middle-class and working-class home-owners closer together. But it’s not going to happen in Ballsbridge. The developer instead has bought a block of apartments in Ringsend (a working-class Dublin area), thus leaving his prestigious Ballsbridge development free from the stench of the working class.

Don’t have your children educated alongside them during their teen years, don’t buy a house where you and your family might be in daily contact with them: if we were to substitute “foreign” or “Muslim” or “Jewish” for “working-class”, there’d surely be an uproar. But since it involves class, the rules remain in place and nobody really minds.

Maybe we find it easier to accept this class-apartheid system because we’ve been living with religious/political version of it for at least one hundred years.

View all posts by Jude Collins →
The repeal of the Eighth Amendment: some facts
Brexit: Don’t think twice, it’s all right?