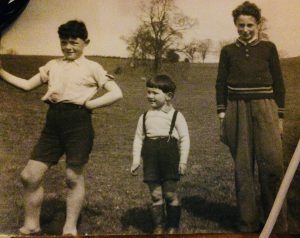 The last priest’s funeral I was at was for my cousin Canon Eugene Dolan. In addition to a moving eulogy by his brother Monsignor Andy Dolan, there was a man from St Edward’s parish in Salford, near Manchester in England, where Eugene had been stationed for the previous forty-seven years. This man talked about the difficulty he had in composing a short speech remembering Eugene, who clearly was much-loved by him and other parishioners. The man explained that it was only when he identified the block to composition that things came together. The block had been, he said, emotion: he was afraid that he’d break down and make an exhibition of himself. I want to tell you it’s with similar fears that I’m writing about my brother Paddy, who died on Christmas Day and who, had he lived, would have celebrated his eighty-sixth birthday tomorrow.

How do you sum up eighty-six years in a few lines? You can’t, but let me try by choosing a few adjectives that might help describe him.

Solitary. He had a number of hobbies that he pursued, but they were nearly all solitary. When he went to All Hallows College in Dublin as a seminarian, he developed a love of classical music, and during the holidays he used sit for hours in the smallest room in our house, listening intently to Beethoven or Brahms or – we used to pronounce this one like a belch – Bach. Just Paddy and the composer, linked by those timeless notes.

And another solitary pursuit – fly-fishing. He would spend hours on end in his waders, in the middle of the River Strule at the bottom of our front field, fishing for trout. He once caught a salmon on his trout rod, and after hours managed to land it. He was still proud of that sixty-five years later.

And another solitary pursuit – reading. The house was littered with paperback books – Penguin and Pelican – P G Wodehouse, G K Chesterton, Agatha Christie, Edgar Wallace and countless others. My sister Marie would testify to this: she remembers when our mother was running around trying to get the family ready for school, Paddy would be sitting, shoes still not on, his head, as they say, stuck in a book.

But there are other adjectives that describe him: kind is one of them. I was ten years younger than him and must often have been, as Seamus Heaney wrote about being a little boy following his father, “…a nuisance, tripping, falling/Yapping always”

But I don’t ever remember Paddy saying a harsh word at any time, although I’m sure I merited it. And as many of the family know, that kindness, that generosity was still alive and active in his eighty-sixth year.

Intelligent – that’s another word that speaks of him. When he decided to be a priest, he applied for Derry Diocese – but the bishop of Derry, having plenty of recruits in those by-gone days, figured Paddy wasn’t smart enough to study for a degree and turned him down. So Paddy went to All Hallows College instead, where with a few fellow-seminarians he rode his bicycle to UCD for three years and got a degree. Proving what most of us know: most bishops haven’t a clue about the clergy. You note I say most.

Part of Paddy’s intelligence was his love of gadgets. The first time he came home from NZ – Irish priests weren’t allowed back to Ireland for the first ten years – he brought with him a wrist-watch for my father, which at the time was the wonder of the world, because you didn’t have to wind it. Instead, it had a battery that gave out a loud and vaguely frightening hum, and it was hard to know who took more delight in it, our father or Paddy.

Sometimes, it must be admitted, Paddy’s intelligence made it hard for him to empathise with other people. I remember him telling me, when I was very young, about how time was another dimension, just like length and breadth and height, and if you travelled fast enough – faster than the speed of light – time would go more slowly or even turn backwards, making you younger. I reminded him of this while he was in hospital this summer, and told him that, sixty-five years later, I still didn’t understand how speed could be linked to time, and complimented him on his grasp of the theory. He looked at me in a surprised way and said, almost in disbelief “It’s only common sense.” It was to him, but it wasn’t to me.

And he could be maddening too. Certainly in the earlier years when he came back on holiday to Ireland, he was always eager for some activity – a classical music concert; a visit to some remote relative where he’d then leave you to do all the talking while he sat and listened; a Gaelic football game being played two or three hours away. He had an insatiable thirst for going, going, going. He visited practically every corner of the globe and he assumed that you shared his enthusiasms and his desire to go somewhere, until you wanted to tell him “Sit down, Paddy, would you, and just – just be for a while!”

Another word for him, that maybe linked to his solitary nature and his interest in music and gadgets: a certain shyness. I’ve no doubt there are those that’d disagree, but I was looking the other day at a photograph that was taken of Paddy, my brother Michael and me, when I was , I would guess, about four years of age. We’re standing in a field, and I’m pudgy-faced and glancing off-camera, at a bird or a rabbit or a cow – as usual, failing to concentrate and failing to do what I was told, which in this case was look at the camera. My brother Michael is standing with one hand leaning against a post, the other on his hip, looking muscular in his short trousers and eyeing the camera with a sort of mild amusement. And Paddy is standing in baggy long trousers with his hands stiff by his sides, his chin tucked into his chest, looking up at the camera from under his eyebrows, the picture of shyness. I think in some ways that shyness never left him.

Because he always found listening to people easier than talking to them, I think. And I’d also guess that that was what made him so loved by the many people he served in his work as a priest for sixty years in NZ. Those of Paddy’s siblings who visited him during his life in New Zealand will testify to the warmth and affection the people there had for him. And since his stroke in August and ultimately his death four days ago, I’ve been overwhelmed by the sympathy of his fellow priests, his bishop and those people who knew him. He was, as I’ve said, solitary, intelligent and kind. But above all he was loved – not just those of us on this side of the world, but in that place on the other side of the globe, to which he travelled in 1957, a little homesick but keen to see this new world called New Zealand and to spend his life in the service of the people there.

During the summer, when Canon Eugene Dolan was in the City Hospital in Belfast being treated for the advanced stages of cancer, Paddy was in the Royal Victoria hospital on the other side of Belfast, being treated for his stroke. I mentioned this to Paddy and his response was, what a pity he couldn’t come and visit. So I taped a very short video greeting from Paddy to Eugene; and then I got Eugene to do the same, which I played back to Paddy. I think they both got something out of that.

There was a gap of about five years between Paddy and his cousin Eugene as seminarians at All Hallows College, and a gap of a few miles between them, in their hospitals in Belfast. Today, there are no gaps. As Eugene’s brother Andy said, there’ll be one big All Hallows reunion between them now. And as Paddy’s bishop in New Zealand, a wonderfully efficient and caring man called Pat Dunn, whom I’ve got to know through many emails and phone calls since Paddy’s illness last August – as Bishop Pat put it, Paddy died on Christmas Day, and in doing so gave a whole new level of meaning to the term “Going home for Christmas.”