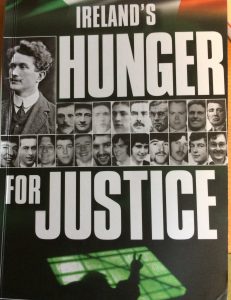 As we prepare ourselves for the annual bout of over-eating and drinking, set in the warmth of our families in most cases. the book I find myself reading provides a stark contrast. Its title is is Ireland’s Hunger for Justice and is published by the Tomás Ághas Centenary Memorial Committee, in Kerry. It’s a meticulous account of the lives and last days of the twenty-two hunger-strikers who died during the twentieth century.

In the north we’re used to thinking of the ten hunger-strikers who died in the 1980s, starting with Bobby Sands and ending with Micky Devine. This book shows how the hunger-strike in the 1980s formed part of a line going back to Kerryman Thomas Ashe, who died in 1917 after only eight days on hunger-strike. The authorities attempted to force-feed him with disastrous consequences. He was thirty-one years of age.

And the list goes on, with profiles of men I knew about, others I didn’t. Michael Fitzgerald of Cork, who died in Cork Prison in October 1920; and Terence MacSwiney of Cork, who died in Brixton Prison later in the same month. The line concludes with Michael Devine of Derry City, the last of the 1980s hunger-strikers to die.

The profile of each man is meticulous, starting with their birth and school days and ending with their funeral. We get a sense of lives crammed with incident and tragedy, defying the short number of years they had on this earth. And we get a sense of a chain of defiance running through the entire century.

The photographs – and there are many of them – are wonderful. Some show the hunger-striker with his family members, with comrades, with his British warders. Others give us close-ups of their funerals and the outpouring of public sympathy and admiration for their sacrifice.

The most painful – and worthwhile – element in the book for me was the close-up description of what being on hunger-strike was like. The book opens with a long poem by Gerry Kelly, in which he describes in horrifying detail what it looked like and felt like, when the prison warders and attendant doctor entered his cell with their force-feeding equipment. How a human being could maintain their resolution in the face of such treatment is baffling.

Almost equally horrifying is the description by Laurence McKeown (himself a hunger-striker) as he and others listen to the agonised cries of a comrade.

“There was no warning sound of its approach, just a very loud bellow. The only thing I can liken it to is the sound a cow makes at times. It was very low, very deep and long – an inhuman sound. The MO with us in the yeard looked up and said “What was that?” “It’s Paddy Quinn” I said. “What’s he doing?” he asked. “Dying” I replied.

The book has been assembled by a committee who set out to commemorate the hundredth anniversary of the death of Thomas Ashe. From that it grew to an account of all those republicans who died on hunger-strike during the twentieth century. Prominent among those on the committee was Martin Ferris TD, himself a former hunger-striker. The book clearly involved many hours of research and organisation, and is packed with informative and moving accounts of men who give a new depth to the concept of courage.

This book may have started as a tribute to Thomas Ashe, but in its final form it provides an indispensable guide to the lives and deaths of men of unbreakable spirit.

Read it and weep.