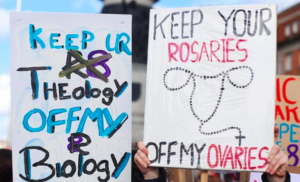 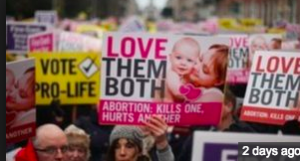 There can be few people in Ireland who can’t tell you how many people were killed on Bloody Sunday in 1972. Most would also be able to tell you that thirteen of the fourteen died on that January day, while the fourteenth victim died a few months later.

Rather less would be able to tell you how many people were injured by British soldiers that day. In fact fourteen people were injured. But why is it that most of us know how many died but we tend to be hazy on how many were injured? That’s easy: because being wounded, however horrible and life-constricting, is better than being killed.

Which brings us to the core question of the abortion debate which is beginning to gather steam in the south. The leaders of Fine Gael and Fianna Fail have expressed their view that there should be a widening of the circumstances in which a woman can have an abortion in the south, with the proposal that abortion be freely available – ‘on demand’ – up to twelves weeks.

There are two questions that might be asked – should be asked – which go to the heart of this matter. Is the growing thing within the woman’s womb a human life or not? And secondly, if it is a human life, what value do we attach to it?

There are, of course, a great number of other questions which relate to these two central questions. How has the foetus/baby come into existence? Was it the result of a loving union, or a one-night stand, or a failure to use contraceptive protection, or a rape, or the result of incest? Or do all the signs indicate that the foetus/baby will die at birth or shortly afterwards? All of these questions are as real and important to those involved as are the wounds of those injured by British army bullets on Bloody Sunday. Try telling someone injured in that way that they’re lucky, and you might get a short answer. But we all know that in one sense they were lucky: they weren’t killed.

There’s an article in today’s Irish Times which calls on everyone involved in the abortion debate to conduct it in a civilized, respectful way. I’d echo that and I’d one other adjective: discuss it in a relevant way. Don’t use it to call those with differing views names.Use it to deal with the central issue: whether the foetus/baby is in fact human life. If it isn’t, then I can’t see what’s left to discuss. Of course a woman has the right to decide what happens to something in her body. If on the other hand if it is a human being, we have to then ask how we regard human life and who should have control over the life of this human being. Would  intense suffering on the part of the mother  (and father)  be sufficient grounds for ending that life?

If a clear focus is kept on the two central questions and if people debate these questions in a rational, respectful way, then the Irish people could have a valuable discussion of an extremely important matter. If we fail to keep focus or descend into abuse or ad hominem attacks, we should be ashamed of ourselves.