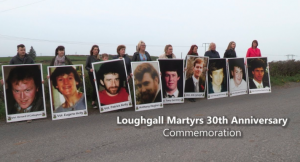 In our divided society, it’s common for people to paint the past in different colours. The most obvious colours are red, white and blue: the decades of the Troubles consisted of the IRA marching down a long and bloody path while the forces of law and order tried to defend law-abiding people. Less obvious, or at least less articulated, is the colour green: the violence was the product of fifty years in a sectarian state, followed by the forces of law and order giving a clenched-fist response to those who sought their civil rights. Fair enough, really: it’s hard to get everyone to agree on the past.

But occasionally someone will come out with a comment that is breath-taking. Such a one is William Matchett, author of a book titled Secret Victory: The Intelligence War That Beat The IRA. Matchett has waded into the recent controversy over the Loughgall killing of eight !RA volunteers. He believes that claims about Gerry Adams setting up the killings are irrelevant, because the IRA was riddled with informers. What should be concentrated on, Matchett contends, are the IRA men who were killed.

“Padraig McKearney and Jim Lynagh were psychopaths and probably the most prolific serial killers from these shores – yet they are regarded as mythical figures by some”. He goes on to note that the “merciless” East Tyrone Brigade was responsible for at least 250 brutal killings.

He appears to base this claim on the ballistics report which found, we’re told, the IRA’s weapons matched those used in with many other killings

Matchett’s claims leak at a number of points.

For one, is it possible that the same weapon might have been used by different members of the IRA at different times? IRA volunteers didn’t, as far as I know, have exclusive use of particular weapons. So the fact that the weapons found at Loughgall may have been used in some 250 killings does not mean that the IRA men killed at Loughgall were responsible for all those killings.

Then there’s Matchett’s description of two of the men killed at Loughgall – Paidraig McKearney and Jim Lynagh – as “psychopaths”. This term used to be tossed around by unionist and British politicians when they spoke of the IRA: its members were suffering from a mass outbreak of mental disorder which led them to engage in pointless mayhem. No explanation was ever offered for this mass outbreak of mental illness among hundreds of young republicans which came out of nowhere in the early 1970s and departed as mysteriously in the mid- 1990s.

But since Matchett appears convinced that the Loughgall Eight were psychopaths, on the grounds that they were involved in the killing of 250 people, what would his diagnosis be on someone like Sir Arthur Harris, more commonly known in Britain as Bomber Harris and in Germany as Butcher Harris?

In 1945 Harris ordered the carpet bombing of the German city of Dresden, which at the time was swollen with refugees fleeing from the advancing Soviet army. The Harris-initiated bombing of that German city led to the deaths of some 25,000 innocent civilians. Harris was later knighted for this work and a statue erected in his honour. When asked thirty years later how he felt about the deaths of so many helpless people, Harris replied “If I had to have the same time again I would do it again”.

To the name of Butcher Harris might be added many others: those who gave the orders for daylight slaughter in Derry on Bloody Sunday and then spread systematic lies about the victims; those who aided and abetted the Dublin-Monaghan bombings, those who conspired with the Glenanne gang to kill dozens of innocent Catholics.

It’s clear that if Matchett has a moral compass it’s one which leads him into some dubious moral territory. And when he goes on to describe those killed at Loughgall as “merciless”, you begin to wonder if Mr Matchett is feeling all right. The eight men slaughtered in a hail of bullets are described as “merciless”, while those who gunned them down rather than arrest them are…Matchett doesn’t tell us what they are, but he would presumably argue they were keeping the peace.

Breath-taking is a mild word for the views of such people.