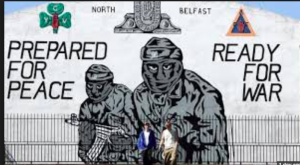 It may have been painful – no, let’s get real, it was and is painful – that Gary Haggarty should have received a sentence of just over six years for his crimes. Equally painful, in some ways, are the lessons it teaches us about the state and its concern for its citizens.

There are, of course, arguments in favour of Haggarty’s light sentence. His co-operation has made it possible to prosecute considerable numbers of his UVF colleagues. But that doesn’t change the lessons that we as citizens must learn.

Lesson 1. You can commit five murders of innocent people and the state won’t punish you. If like me you grew up with the notion that everyone is equal under the law, the Gary Haggarty verdict clearly makes that a joke. In the ‘right’ circumstances, the state will accept the unlawful killing of you, your sibling, your parent, your grandchild, and allow the person who performed those killings to walk away virtually untouched.

Lesson 2. If someone is planning a murder and the circumstances are right, the state will help – no, not you, the intended victim – but the person who is planning your death. They may even encourage him; they certainly will provide cover for him

.Lesson 3. Those state forces who support the murderer – people whose salaries you and I pay – will not be held to account for their actions. We don’t know if they’ll be promoted but there are no indications that complicity in murder will damage their careers. One thing is sure: their collusion in killing will never be held against them. You and I will pay out so they continue to work and live in the manner to which they’ve become accustomed.

Lesson 4.These killings or their support by the state weren’t a spur-of-the-moment matter. Haggarty’s career spanned sixteen years. So both he and his handlers- and those who authorized them – had plenty of time to consider whether they were doing the right thing. Over a period of sixteen years, they must have thought about it and decided that, all things considered, killing innocent people with impunity was the right path to take.

Lesson 5: Some months ago a man released a video of himself with a loaf on his head. There was instant outrage among many public representatives, with much emphasis on the pain he was causing to victims of illegal killings. The pressure was such that the man felt obliged to resign his seat as an MP. Here we have a man, not with a loaf on his head, but the blood of innocent people on his hands. Will the pain of relatives be such that something will be done about it – that those supporting such heinous actions, that Haggarty himself – will be forced to take some step to show their contrition?

Don’t even attempt to answer that. The days of second-class citizens and first-class killers continue in our North-East Nest.

Joe and the dumb nationalists in the north
Abortion: what’s the question?