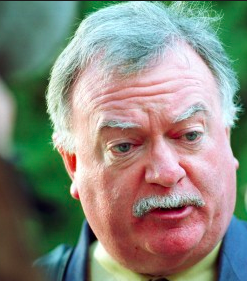 When I was an impressionable teenager, I used to read Time magazine. It impressed me mightily: it could take some matter – any matter – and make what had been vague and fuzzy precise and sharp-edged. It wrote with clarity, it spoke with authority. Time was my bible. And then one week they did a cover issue on the south of Ireland. I think it was Sean Lemass they put on the cover, and they provided a neat picture of the south of Ireland, past and present. It was well-written, it was brisk, it was lively. But there were areas in the report where they showed either they didn’t know what they were talking about or chose to simplify an issue to the point of distortion. From that day I realised that outsiders can be misleading, in the nicest possible way.

I came on a piece on the Irish Times website this morning which gave me a similar feeling. It was by former Senator Joe O’Toole, a man who, in my simple-minded way, I voted for in the late 1980s as National University of Ireland representative in the Seanad. This morning, Joe explains why nationalism is a shocking scourge. Beneath a picture of Michelle O’Neill and Arlene Foster, he writes ‘DUP and Sinn Féin will never bridge north’s divisions.’

How so? Because both sides engage in “an interminable game of snap.” One plays the Gaeilge card, the other the Ulster Scots card; one leads with the poppy, the other trumps with the lily. Shamrock v sash. Tricolour v union jack.

You get the idea? Two blind opponents, set on goring each other, incapable of vision or progress.

Joe puts this all down to nationalism – Irish nationalism by Sinn Féin, British nationalism by the DUP – and hits Leo Varadkar a hoke for saying “To the nationalist people of Northern Ireland, I want to assure you that we have protected your interests…and you will never again be left behind by an Irish government.”

Joe doesn’t like this. “Nationalism”, he explains, “is a nasty and uncomplicated political philosophy characterized by superiority and inflexibility”. And there was me thinking that nationalism was a love of one’s country and a desire to make it a better place.

Joe goes on to argue that it is clumsy, inaccurate and unfair that “anyone who favours a United Ireland be branded a nationalist”, The reason this would be unfair is that there is “a huge block of reasonable and moderate citizens who…shun extremism. Such people who believe in parity of esteem, mutual respect and reasonable compromise.” And who are these non-extreme United Irelanders? “Social Democrats, Socialists, Greens, Communists, middle of the road unionists and the Alliance and SDLP parties”. These, Joe figures, are people who would “prefer to share rather than impose their culture, history, language, customs and beliefs”.

Outside that deeply reasonable coterie, there is no salvation.

It doesn’t seem to have occurred to Joe that there might be a major party in the north that likes to trumpet its nationalism around 4,000 times every year. Or that there is another nationalist party which is seeking one thing before reforming an Executive: a commitment to mutual respect and the delivery of past promises.

Although maybe Joe realises all this. But alas, it  doesn’t fit into the smooth-with-use guidelines of the one-lot’s-as-bad-as-the-other storyline that so many in the south of Ireland are sold about us here in the north.

But hey. Joe’s dismissal of politics in the north as two hopeless tribes will no doubt be balanced in The Irish Times later this month or even this week….Virginia, I am shocked. You really must not use such words. Have you no respect for an ex-Senator who just likes to keep things simple? Or the Paper of Record?