Pics 1-3 are by Perkin Warbeck: 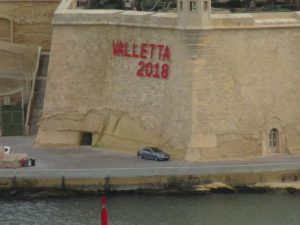 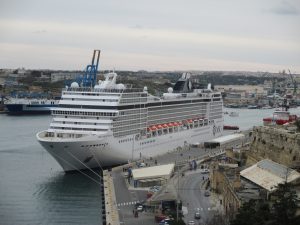 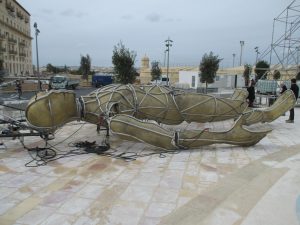 Pic 2: . Culture Vultures from all arts, crafts and parts arrived.

Pic 3: . Including this Brobdingagian  character who set speculative tongues a-wagging.

Was it Gulliver on his Travels ?

Perhaps even Oliver Reid, in charateristic horizontal pose, on his Travails?

(What prompted this latter speculation was its proximity to The Phoenician Hotel in the background, from whose Departure Lounge Bar  old Preab san Ól-iver rode off, sadly, into his final sunset).

Actually, it turned out to be a supersized prop of a group of outdoor arobats, La Fura dels Baus from Barcelona.

Which in turn caused a further bout of head-scratching and chin-stroking: would that now be Barcelona, Spain or Barcelona, Catalonia?

In what turned out to be an Extravaganza of  Maltese Mario Lanza  proportions (i.e. Joseph Calleja), there were, of course, a minority of Moaning Minnies and Dismal Jimmies among the overseas visitors  who are, alas, always with us.

Their ullagowning was crowned by the following bile-filled bellyache:

– ‘The commentary on the various  ceremonies was entirely in – Malti !’.

Foremost among these,  in tones that were tender and in tones that were gruff, were those  Liliputian Linguists,  the Wee Monoglots who, proudly, hail from the European Union’s  last remaining English Only-speaking Member Country.

View all posts by Jude Collins →
Why an agreed anti-Shinner candidate in West Tyrone would be a super idea
Leo and Mary Lou: two new leaders