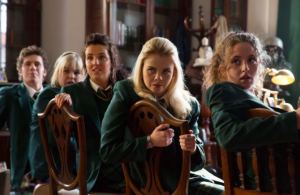 In some ways I’m sorry that Derry Girls, the new network comedy series on Channel 4, was ever made. Not because I’m not interested in Derry – it’s one of the most fascinating and beautiful towns/cities in Ireland – but because it exposes us to a wider audience, and when that happens we tend to lose our brains.

During the Troubles it was excruciating. You’d have Raidio Uladh/Radio Ulster presenters interviewing some guest from abroad (yes, Virginia, Britain is abroad), and they would do everything short of going down on their knees to the visitor and begging “Oh please, please – you do like us, don’t you? We are warm-hearted and witty and wonderfully kind – we know that – but we really need to hear you say it, or nobody will know and we’ll feel depressed!’ God, how I felt humiliated when I listened to that kind of grovelling interview. And believe me, they were many.

So yes, I’d really like to see Derry Girls being a smash hit. I mean, if that ragbag of rubbish Mrs Brown’s Boys can have them shrieking in the aisles in Manchester and Devon, why wouldn’t Derry Girls? But we should want it to be good for our sake and its own sake, not because we want to impress our British masters

It’s an old story – G B Shaw used to say that the Irishman always wound up playing the fool to amuse his English overlords. In Canada, they have the same difficulty with the US: a Canadian singer or actor or TV presenter has it made only when s/he has been accepted and admired by the US. Until then, the jury is out. It’s only when they’ve been validated by Big Brother that they relax and feel safe in judging that their native son/daughter amounts to something.

So if Derry Girls is good (actually I’d say it’s just OK, judging by the first episode), then it’s good because we like it, not because The Times or the Daily Mail tells us it’s to be admired. If we’re always anxious to discern the judgement of our next-island neighbours before we can accept that something home-grown is good, we’re never going to grow up.

All that said, we shouldn’t insist something is good simply because it’s Irish.

View all posts by Jude Collins →
An arrogance that leaves you gasping
Was Barry McElduff being deliberately offensive?