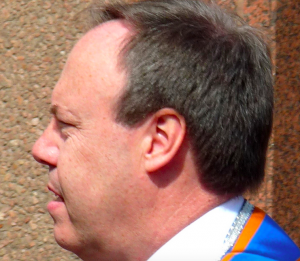 In yesterday’s Belfast Telegraph (well, the online version I have is dated February 25), Nigel Dodds is making two things clear: there is ‘bad blood’ between the DUP and Sinn Féin, and it’s all Sinn Féin’s fault.

After you’ve picked yourself off the floor, to which you collapsed on hearing that Nigel is blaming Sinn Féin for something, you might be wondering why Nigel believes – or ‘claims’ might be a better word – that it’s all the fault of the Shinners. Well, it seems they’re “insulting the victims of terrorism”.

Unionists are very fond of the word terrorism. They see it as a short-hand way of describing a particular form of military action and condemning it in the same breath. Actually, terrorism is a form of violence – a methodology, not a philosophy or ideology. It works by causing such terror in a population that the people in that population will surrender. We saw it used on a grand scale at Hiroshima and Nagasaki by the Americans and at Dresden by British bombers. Here, it was used by loyalist paramilitaries: the many deaths of innocent Catholics were  in part the result of simple hatred of Catholics and Catholicism; but it also was the stated goal of unionist paramilitaries to frighten the Catholic population, so drying up the sea in which republican paramilitaries swam.

OK, lesson over. Back to Nigel.

His charge about insulting victims is, of course, part of a sustained campaign to make any respect for dead IRA volunteers look like a provocative act. If these commemorations of republican paramilitaries can be staunched, that will leave the ground clear for the only respectable form of commemoration – that of dead members of the British armed forces. More importantly, it will reinforce the version of the past which says that British armed forces were guardians of the peace, and the Troubles were all about the murderous IRA.

Nigel also says that Sinn Féin have “weaponised” the Irish language and so have caused “deep difficulty” for many unionists. Brief history lesson, Nigel: in 1367 the Statutes of Kilkenny made it a crime for an English person to speak Irish, have an Irish name or marry an Irish person. More recently in the nineteenth century, Irish schoolchildren had to wear the ‘bata scóir’ or tally-stick around their necks. Each time they were caught speaking Irish a notch was made on the bata scóir, and at the end of the day the child was punished in keeping with the number of notches.

Please, Nigel, whatever you do, don’t talk about the Shinners politicizing the Irish language. It shows a deplorable ignorance in a highly-educated man.

Footnote:  I see where the Belfast Telegraph article reporting all this was written by one Jonathan Bell. You don’t think that…Nah, impossible. Right?

Why do many unionists become enraged at the idea of an Irish Language Act?
“Dear Nationalists” – that letter from civic unionism