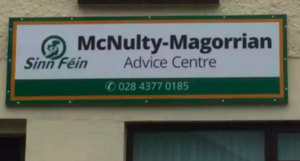 The current dispute over the  Sinn Féin advice centre in Castlewellan being namedd after two IRA men – Peter McNulty and Paul Magorrian – is raising some ire among unionist politicians. The fact that the centre was named twenty-five years ago seems to have been glossed over. But despite this, the dispute raises a key question: how we view the past.

Unionist politicians see the twenty-five years of conflict here as a decades-long killing spree by republicans, followed by a refusal to recognize their murderous past. Republicans look back and see fifty years of gerrymander and discrimination, followed by efforts to obtain civil rights peacefully, followed by security forces beating peaceful demonstrators off the streets, and worse. Many young republicans, faced with this, saw fighting back as the only response available.

In short, we have two very different takes on what the past looks like, and how the combatants in the years of violence are to be regarded.

On the Nolan Show this morning, attention was drawn to the hurt that the loved ones of IRA victims in the Castlewellan area might feel, if they received correspondence from their MP Chris Hazzard with the names of Peter McNulty and Paul Maggorian on the top of that correspondence. That’s a legitimate concern. Equally,  those who lost loved ones through UDR collusion (again I’d urge you to buy and read Anne Cadwallader’s  book Lethal Allies) must surely feel pain when they drive through Lisburn and pass a large statue honouring the UDR.

Sometimes nationalists and republicans are accused of trying to rewrite the past when they point to cruelties and injustice inflicted by the state here. It’s not actually rewriting the past: it’s challenging the unionist assertion that their view of the past is the only one that is acceptable. The Good Friday Agreement has stated that all sides must be allowed to respect their dead. Unless unionist politicians can learn to accept that nationalists and republicans are entitled to view the past differently from them, and stop abusing them when they do, this debate will chase its own tail until it devours itself. Respect for difference, Nelson. That’s all that’s being asked for. Is that too much?