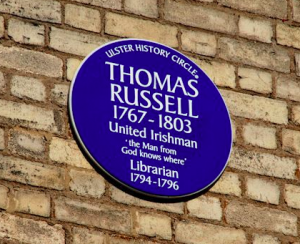 As regular readers know, I no longer do guest blogs on this site. However, when I received this from a friend this morning, I laughed so hard I figured keeping it to myself would be a sinful act….Bain sult as – Enjoy.

Unionists have reacted with fury at the placing of a plaque dedicated to a notorious terrorist at Belfast’s oldest library.

The plaque, in honour of Thomas Russell, has been on the library wall for over 10 years but recently came to the attention of the DUP’s Nelson NoCauseintheland.

“I was outraged at this obscenity. It’s well known that Thomas Russell ate children and threw them down a well and he was a key figure in the IRA in 1798.

“It’s also clear that DUP voters don’t read and so I question the need for any library, particularly one that denies the world started 6,000 years ago.”

TUV leader Jim McSinister described the plaque as “a detestable symbol of capitulation.”
“It is another iniquitous step towards removing our British identity,” he said at his Cromwell Street headquarters which is adjacent to the Victoria Centre.

Radio Ulster’s Stephen Nolan says his show was flooded with calls about the plaque.

“The phones were going boogaloo. Every line into the building jammed with Jamie Bwyson and Norman from Bangor lucky enough to get through first for the 337th day in a row.”

Meanwhile, campaigner Willie Frazer has demanded the destruction of Napoleon’s nose on the top of Cavehill.

“This is quite clearly an incitement to violence and to revolution and is further evidence of a republican plot and was no doubt built with Vatican funds.”

View all posts by Jude Collins →
Saturday pics of the week
Why do many unionists become enraged at the idea of an Irish Language Act?