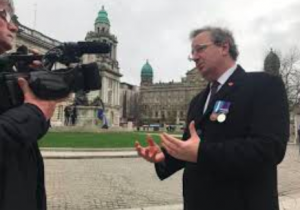 You’re no doubt familiar with the concept of l’esprit de l’escalier, the things you wish you’d said a few minutes earlier but didn’t. I had a keen sense of that after discussing the case of the hooded men with Doug Beattie on the Stephen Nolan Show t’other day.

The subject of discussion was the failure of the hooded men to have the original findings of the European court changed. The court had found originally that the men had been subjected to cruel and degrading treatment but not to torture.

So what kind of thing happened to the hooded men? Again, you’ve probably heard – they were put in boiler suits with a hood over their head, and that’s how they stayed for seven days. As one man put it, it was their day clothes, their night clothes and their toilet. They were forced to stand with fingertips leaning on a wall and legs apart. If they moved, they were beaten, frequently unconscious. One man had his foot stamped on, and when he finally got a chance to examine it, he had no toenails. Prisoners were put aboard helicopters, which took off. They were then told they were several hundred feet in the air, the door of the helicopter opened and they were pushed out. In fact they were only a couple of feet in the air, but the men were convinced they were about to die.

Doug Beattie, who has a Military Cross for his contribution to the British army’s work in Afghanistan, particularly his part in an operation that attempted to retake the town of Garmsir in Helmand Province, declared the treatment of the hooded men was wrong. You got that? It was wrong. Doug then said he didn’t want to engage in whataboutery, following which he spent around three minutes doing just that. He then went on to ask me if I condemned a list of IRA killings, including inevitably Jean McConville.

As readers of this column will know, I am a man of a gentle nature and gentle vocabulary. But I really regret not having done two things.

The first is to have insisted that we stick with the subject under discussion – the hooded men.But Doug, like so many unionist politicians, wanted to talk about anything but the brutalities of the British army and the government people at the highest level who sanctioned such treatment of human beings. The trouble is, on the Nolan Show or pretty much any other radio or TV discussion, the presenter feels compelled to provide what looks like balance. Which in a word is balderdash. If you’re discussing the case of in this instance the hooded men, then that’s what should be examined. Certainly refer to other killings but come back  to the topic in hand. What Beattie did, of course, was slither out from under a ghastly injustice and switch things so I was seen to be the one under scrutiny about republican violence. That should not be allowed to happen. There’s a difference between balance or widening the issue and letting people off the  on the hooded men.

The second thing is, why I didn’t repeatedly ask Doug if he thought the treatment of the hooded men and if he’d ever done anything like that. anywhere in the world., him being a military man and all. Oh well. Maybe I’ll get onto the Nolan Show another time and we’ll hear what Doug did (nice title for a book, incidentally – What Doug Did) in Afghanistan that merited a Military Cross.For example,  did it involve killing anybody? Or treating them in a ‘wrong’ way? After all, we now know that’s what the British army do.

View all posts by Jude Collins →
A reflection on Sir Nick Clegg, Lord Michael Heseltine, and a dead cat
Mary Lou and the media