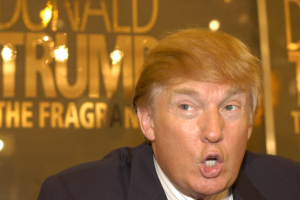 OK – what Irish politician is believed to have said it was the happiest day of his life when Prince Charles visited Ireland?

And what other Irish politician  has invited President Trump to visit Ireland and hopes he will visit County Antrim?

Right. Too easy – much too easy. John Bruton was the one who got all moist and trembly when Prince Charles came to Ireland. There is no record, as far as I know, as to what Bruton’s wife told her husband when she heard about his declaration of bliss.

The second is easier still, since it’s in The Belfast Telegraph and so must be true: Ian Paisley Jr has invited the man who gave courting advice on how best to grab a woman. “I’m confident that he will be here very soon” Paisley says. “I look forward to welcoming him and to seeing him, hopefully in County Antrim.” The Belfast Telegraph carries this photograph with their report, saying that Mr Paisley retweeted this picture of himself with First Lady Melania Trump in the White House. 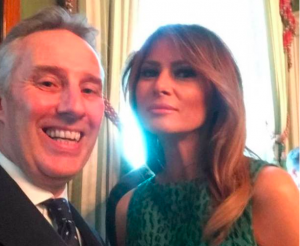 It’s clear that Ian Jr has discovered Burton-levels of pleasure in finding out that the Trump family are a part of his social circle.

There are two ways we can respond to the prospect of a Trump visit. We can get disgusted and outraged, claiming that a man with his many ghastly qualities shouldn’t be let nearer Ireland than Ellis Island. The other is that we can let the invitation from Ian stand and wait for the arrival of Donald. I think the latter course would be far more interesting. Speaking of Ireland, Trump notes that he owns Doonbeg golf course in Co Clare: “I have property there and I might not get to see it again, but I will”. You got that? He might not get to see his golf course in Clare but he will. I say if he comes, and if he visits the border, as he talks of doing, he’s going to say so many brain-dead stupid things that we’ll be falling to the floor and rolling about.

As for Ian Jr, I’m reminded of the old song with the immortal lines describing a drunk lying in the gutter, alongside a pig. Alady who is passing remarks:

“ ‘You can tell a man who boozes /By the company he chooses’ ”. And the pig got up and slowly walked away.”

“I have property there and I might not get to see it again, but I will,