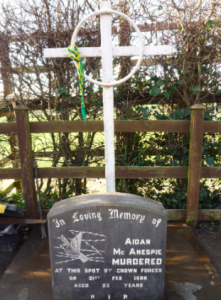 Some unionist politicians and journalists fret that young people today are being led to see the years of the Troubles as inevitable, and the IRA as taking a stand against oppression. This, they say, is to distort the past and to legitimize ‘terrorism’. Maybe if they studied the case of Aidan McAnespie, who died just over thirty years ago, on 21 February 1988, they might see the past a little differently.

Aidan McAnespie was twenty-three when he died. He lived in Aughnacloy,Co Tyrone, and like many young nationalist men in the town, he was the subject of harassment and threats by the ‘security’ forces. Aidan’s father claimed that a soldier had stopped him eighteen months before Aidan was killed and told him “There’s a bullet here in this gun for your son Aidan.” McAnespie was a keen GAA footballer, and it was while travelling to a GAA match and just after he had passed through a British army check-point that he was shot in the back and killed.

The ‘security’ forces quickly claimed that the soldier who fired the fatal shot had been moving the heavy gun, which was wet, and his finger slipped, discharging the weapon. The shot which killed Aidan, they claimed, was one of several which ricocheted off the road behind him. Grenadier Guard David Jonathan Holden, the man who killed Aidan, was fined for negligent discharge of his weapon and two years later discharged from the army on medical grounds.

Cardinal Tomás O Fiaich was in the US at the time of Aidan’s shooting. When he was told what had happened, he flew home immediately; at Aidan’s funeral Mass, Cardinal O Fiaich denounced his killing as murder.

In the south, the Minister for Justice Gerry Collins announced an inquiry into the killing by Garda Deputy Eugene Crowley. His report was never published. The RUC conducted an investigation and declared that the whole thing had been an accident.

Thirty years on, it’s generally accepted that the ‘security’ forces were lying when they claimed Aidan’s death had been an accident. So why was he killed? Well, he’d been an election worker for his sister, who was running as a Sinn Féin candidate for Tyrone County Council. He’d also bought some cattle and was clearly intent on settling in this, his home area. There were claims that many young nationalists/republicans were being pressured to leave this largely unionist district, and Aidan was resisting that pressure.

Fast forward to 2008, and a PSNI investigation established that there would need to have been 9 lbs of pressure on the trigger to fire the gun, and that this fact, combined with the hit into McAnespie’s back made the claim of wet hands and accident “so remote as to be virtually disregarded”.

So where from here? Well the first and obvious step is that the Crowther report be released – thirty years too late but better than never. Claims that some of those who testified to Crowther would want to remain anonymous don’t stand up. Many people, Aidan’s family say, who might have been fearful of their names being known because of the possibility they’d be targeted as Aidan had been, are no longer fearful.

Aidan’s relatives were interviewed sympathetically by Miriam O’Callaghan on her RTÉ Radio One programme last Sunday. That very fact suggests the media in the south are slowly letting go of the hoary old version of the Troubles, where the IRA are the villains and the ‘security’ forces the good guys. More and more people in the south are coming to realize that the IRA simply can’t be cast as the villains of the Troubles, given such brutal killings as that of Aidan McAnespie, and the propaganda lies that were instantly put forward to explain what had happened.

Aidan McAnespie’s killing is not a unique event. Dozens of nationalist families have had similar barbarism inflicted on them by the ‘security’ forces. That’s why Relatives for Justice and others are pressing for the release by Westminster of money needed to examine such legacy cases.

Perhaps you’ve heard of life-long learning? For some people, it looks like inter-generational learning will be needed, to establish an authentic picture of the Troubles. The truth about Aidan McAnespie’s death would be a good place to start. Time to come clean with the Crowther report, Leo.

View all posts by Jude Collins →
Roll up, roll up! Watch British PM perform the impossible
Owen Smith MP and Tom Brake MP and not telling anyone about border security