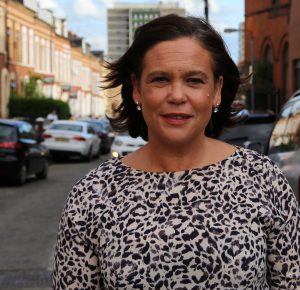 Which is why I know that Mary Lou McDonald has come under fire for saying, in her interview in my book, that the southern media acted disgracefully during Martin McGuinnes’s presidential bid. It was reported as if she had said “Let’s kill all the lawyers.”

What she actually said was “I thought his treatment by the media in the south during the presidential election was utterly repulsive. I’m thinking of Miriam O’Callaghan and RTÉ with their ‘How do you sleep at night?’ I’m thinking of the nonsense of Vincent Browne  (though he is a person I personally like.) You would swear listening to these people that Martin McGuinness was the trigger that caused the northern  Troubles. The utter hypocrisy of it. And the cheek of them to say to him ‘Who are you from Derry to presume that you’re Irish enough or that your citizenship is of sufficient standing that you should contest for the position of first citizen?’ It was absolutely obnoxious. I’d go so far as to say RTÉ represented a failure of public service broadcasting.”

You’ll notice how  the media, themselves quick to rush to judgement on others, get very tetchy when someone suggests they are part of the establishment and so have a stake in maintaining that establishment. Mary Lou hasn’t called for the re-running of the 2011 campaign, nor expressed a view that isn’t echoed by thousands of others. One of the people I interviewed for The Martin McGuinness I Knew dismissed the treatment of McGuinness by saying that everybody got a hard time from the media during that campaign.No they didn’t. Nobody was asked the kind of when-did-you-last-go-to-confession question that Martin McGuinness was asked.

The right to have an independent press and media  is a cornerstone of any democracy. But so is free speech. And if Mary Lou or anyone else is going to be jumped on because they dare to criticize the media, then there’s something shaky in the democratic ground on which we all like to think we stand.