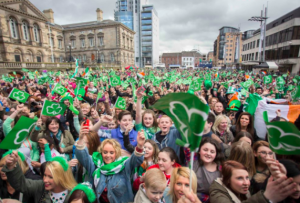 Last night I was listening (again) to Sam Cooke singing “A Change Is Gonna Come”. It’s got an old-fashioned instrumental opening, quivering and soaring strings throughout, and it speaks to the oppression of the African-American people in the US which continues to this day. Yesterday afternoon I did (for the first time in a looooonnng time, and don’t start me, don’t start me) a panel contribution on Talkback. My sparring partners were Malachi O’Doherty and Brian Ervine.

It confirmed for me a change in my own thinking, and like Sam Cooke said, it’s been a long time coming. Shortly after the Good Friday Agreement was signed, Gerry Adams warned that the most important piece of work ahead was to affect reconciliation with our unionist fellow-countrymen and women. Martin McGuinness, whose anniversary is on Wednesday, spent ten years of tireless reaching out to unionism. All that ended with the collapse of the Executive in the face of unionist high-handedness and  Arlene’s crocodile comment.

Most nationalists and republicans I’d been in touch with said “About time” when Martin McGuinness spoke out against the one-way direction of reconciliation. That was more than a year ago. Yesterday, during the on-air discussion and after, it struck me that nationalist Irish people in the north – and maybe beyond – have had enough. William Crawley asked if the tricolour should be part of the St Patrick’s Day parades. That the question should even have been asked tells you the problem. Brian Ervine’s claim that Sinn Féin had hi-jacked Irishness and that the tricolour wasn’t the Irish flag, just the flag of the twenty-six counties hammered the point home.

What Irish nationalists are being asked to do is suppress their Irishness. Malachi O’Doherty claimed that the Irish tricolour had been “besmirched” by its political use. No, Malachi. That won’t do.

We could discuss until Christmas whether the Irish flag has been besmirched or whether Irishness has been hijacked by the Shinners, but one thing is clear: Irish people in the north are being asked to do what no other people are asked to do: celebrate their national day but don’t fly the national flag in case it’d upset someone. That doesn’t promote reconciliation. It promotes mild contempt.

That’s not to say that unionists aren’t welcome to join in the festivities – they most certainly are. If they want to be British and Irish, let’s just focus on the Irish bit and enjoy ourselves. But to say that I can only accept your Irishness if you trim off that bit, cut back on this bit, remove that flag: that brings us back to Ian Paisley in the 1960s demanding the removal of the Irish tricolour from the Falls Road and threatening to do so himself if the RUC didn’t do it.

John Hume’s father used tell him that you can’t eat a flag. Quite right. And, he might have added, a flag won’t eat you. That unionists, who have decorated the six counties with statues and street name and building names and union flags since the state’s inception, and who march with flags and banners over 2,000 times every year – that they should tell nationalists not to carry their national flag on a St Patrick’s Day parade takes some gall.

It’s been a long time comin’, as Sam Cooke sings, but a change is gonna come. In fact, Sam and unionism, it has already come. Get used to this strange beast called Expression of Irishness.

Finally, here’s Sam, which is where we started. Bainigi sult as – Enjoy.