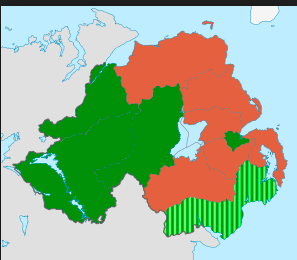 Readers of this blogsite will remember that yesterday, if you happen to be a nationalist or republican, or even a politics-neutral business person who sees the economic damage that a continued border does, there was  good news. The Catholic/nationalist population in our North-Eastern Nest (NEN) is younger and growing, the Protestant/unionist section older and dwindling. So much so that it’s calculated the next census in 2021 will show a Catholic/nationalist electorate majority.

Now for the bad news.

The change will hit the British Labour party in the north of England, but we’re not going to concern ourselves with that. We have our hands full here.

The whole idea behind electoral boundaries is that they will produce the same number of MPs elected by the same number of voters. In practice this is impossible to get precisely right if you’re taking into account the terrain – mountains, rivers, local communities, towns and villages. So there is a Rule 5 in drawing up new boundaries which says there can be a difference of +5% or – 5%. This applies to electoral boundaries throughout the UK. In Northern Ireland, however, there is a Rule 7 which can be applied: it allows the Commission to have the electoral roll in a constituency fall beyond 5% – to 69,401. The Commission would use this only when they felt constrained by other factors, such as the terrain or local communities which shouldn’t be divided.

Still with me? Good. So the Boundary Commission here set to work and decided that using Rule 7 here wouldn’t be needed and they wouldn’t apply it in drawing up constituency boundaries: “The limited flexibility afforded by Rule 7 would not produce a significantly better outcome…The Commission concluded that Rule 7 should not be applied.”

And so it came to pass. The Commission drew up a revised electoral map. Among other things, it decided that “the best models were those which provided for a three-seat Belfast [currently 4]. They were better both at the regional level and for each of the individual Belfast constituencies.” 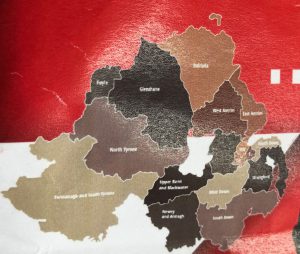 Alas, the DUP didn’t like the look of this. It might result in their losing a seat or two, particularly in Belfast. Ian Paisley, on viewing the Boundary Commission’s proposed changes as shown in the map above, is alleged to have declared “We will see about that”. So the DUP drew up the revised electoral boundaries in the way they thought it should look. And here’s the results of the DUP labours in 2017: 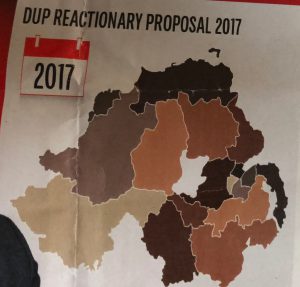 So the Boundary Commission went off, with the words of the DUP perhaps ringing in their ears, and came back with a new boundaries map. You remember in their first map, they said they believed it would be better all round to have three seats in Belfast and not four, and how it wouldn’t be a good idea to apply Rule 7? When they produced their revised proposals, they said “The conditions for engaging Rule 7 have been met” and that a second look “has persuaded us to revise our Provisional Proposals to include a four-seat Belfast”.

Yes indeed, Virginia , although I think you should try to use less coarse language.

Now here’s the thing. Remember that DUP proposed electoral map? Here’s what it looks like when set beside the Boundaries Commission revised map.

By now, you’re probably running around the room banging your head off the walls, shrieking “What’s the difference in the two? There IS no difference in the two!” . Understandable but ultimately futile. Yes, the revised Boundaries Commission map does have an alarmingly similar shape to that proposed by the DUP. And working on present projections, who do you think is going to benefit most by this revised map? Got it in one: the DUP.

So that’s the bad news. The very bad news. Because you’ll remember that the civil rights movement focused on a small number of matters, notably gerrymander – the artificial manipulation of boundaries so you got Londonderry Corporation giving two-thirds of its seats to unionist candidates, while unionists represented one-third of the Derry population. Well, gerrymander is back.

If you have an electoral system that is rigged to advantage one party, then you can forget about democracy. Unionism is rightly alarmed by the inexorable rise of the nationalist population. This is their answer. With that map in place, you can kiss goodbye to nationalists seeing their numbers reflected in either local or Westminster elections.

Oh – almost forgot. Remember that thing about making sure, in deciding on electoral boundaries, that it didn’t disrupt communities, villages or towns? This revised Boundaries map will slice the small village of Dungiven in Co Derry  into THREE different electoral parts. There’s a short film which shows the absurdity of this revised decision.

Do you feel mad as hell? Do you figure you’re going to throw open your window and yell “I’m mad as hell and I’m not going to take it any more!” ? Yep, me too.

View all posts by Jude Collins →
The growing Catholic/nationalist population: is it the death-knell of unionism?
Exception