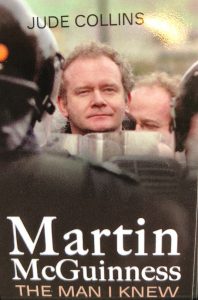 This day one year ago Martin McGuinness died. This evening,  Father Michael Canny,  who officiated at Martin McGuinness’s funeral, will say a memorial Mass in the Long Tower Church, Derry, from which Martin was buried. Martin’s  wife, sons, daughters and grandchildren will gather as a family for an hour of togetherness before attending the Long Tower Mass.

No matter what way you cut it, this is a sad day for most people.  The attendance at Martin’s funeral a year ago attested to that. But already there are people who, while Martin was alive, would have kept their traps shut, who are squirming from the woodwork to malign him now he’s dead. If you doubt me, check out some of the comments in response to a book review of Martin McGuinness: The Man I Knew  on www.sluggerotoole.com . Despite the fact that the book has 27 different perspectives on Martin McGuinness,  these sad trolls who haven’t read the book have been slinging  mud at everyone, including me and especially McGuinness.

That kind of response is depressing. Not because it reacts unfavourably to something I’ve put together, but because there are obviously Know-Nothing not-an-inchers who are implacably opposed to the many positive changes effected here over the last 20 years, many of them due to the tireless work of Martin McGuinness.

Still, I feel optimistic. I know that for every bigoted troll out there, there are at least five fair-minded people who see the need for change and who appreciate Martin McGuinness’s contribution to it. And (plug alert) I hope a goodly number of them will be in Eason’s in Foyleside, Derry at six o’clock this evening, to help launch the book that some, who haven’t even seen it let alone read it, have leapt to dismiss.

Maybe I’ll see you there.