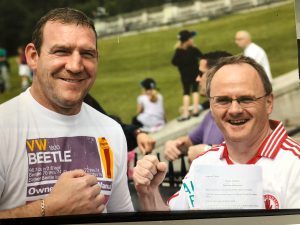 It’s now several months since the Barry McElduff loaf-on-head incident, so you might expect that passions would have cooled and people are ready to look rationally at what happened that night in January. It appears not. According to the Belfast Telegraph a few days ago, Mr McElduff attended Omagh police station voluntarily on March 8, and they are preparing a report for the Public Prosecution Service.

Having thought about the matter over the last couple of months, I believe this is a case where people have allowed emotion to push past reason. Pastor Barry Halliday, speaking for the Kingsmill families, says “ His [McElduff’s} sickening glorification was widely condemned (as) causing much hurt to the families.”

Clearly the pastor has made up his mind about what happened, as have,  if he’s speaking for them,  the Kingsmill families. It’s reasonable to say that the Kingsmill families have lived with cruel pain for decades now, but that shouldn’t prevent us looking at the loaf-on-the-head caper rationally. So here are some thoughts.

I strongly suspect that those calling for fire and brimstone to descend on McElduff know in their hearts that they’re using a political opportunity to destroy a man  they know is not sectarian and not stupid. But sometimes temptation to glide around the truth is too great. That’s a pity. Maybe McElduff’s accusers should have a peep into what they know, deep down, is the truth of the affair.

View all posts by Jude Collins →
Theresa is talking about an Irish border as similar to a Canada-US border. Is that an attractive prospect?
Mary McAleese, her baby brother and the way we were