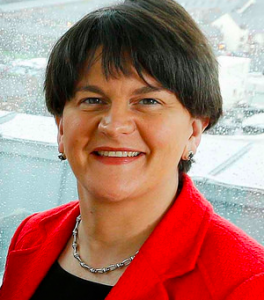 What do Brexit, the accusation that Russia poisoned that guy Skripal, and Arlene Foster’s thoughts about leaving here in the event of a united Ireland – what do all three have in common? None of the three requires rational suport. Brexit is built on a fantasy of making Britain Great Again, blaming the Russians over Skripal is built on the word of British intelligence. Like with Iraq and weapons of mass destruction. And Arlene? Well, no reason there either. She’d just leave. Sin é.

Of course, she wouldn’t be the first unionist to quit Ireland when the natives took over. The population of Protestants in the south of Ireland shrank, we’re told, from 10% of the population to 2% after independence. That’s always held up as an accusation against the southern state: Protestants/Unionists had to leave because…Well, why? Were they boycotted? Was there gerrymander on a state-wide basis? Was there discrimination? Mmm, maybe not. In fact, talk to business people around Dublin and they’ll tell you that Protestants more than punch their weight in the business world.

So why did so many leave in the 1920s and why would Arlene get on the plane if it happened in coming years? I have a suggestion: habit. When you’re used to having things arranged to suit you, it’s a bit hard to break the comfortable habit of being in charge. If there were a united Ireland, by definition unionists wouldn’t be in charge. So it might come back to the old question of equality. Perhaps equality is a pill too bitter to swallow, the Trojan horse that breaks an old habit. Perhaps having to work in politics alongside the natives, without the reassuring feel of Mother Britain’s hand would be too much.

But don’t be overly  critical of Arlene. There are worse things than getting out when the natives become your equal. There was a man on Talkback not an hour ago and he openly declared that he would fight – and he meant literally – he would fight against a united Ireland, if that’s what it came to.

Get the message? That thing about  the Good Friday Agreement and the majority in this state deciding its constitutional future? All hogwash. Just like in 1912, if Britain doesn’t stick around, Ulster will Fight. You have been warned.

Please, tell me there are decent and fair-minded unionists out there who would welcome equality, would work for a better Ireland (lots of room for improvement there) and won’t see the prospect of Irish unity as a call to Unionist arms.

View all posts by Jude Collins →
Kenny Donaldson and his confusing train of thought
Should liars be asked to explain themselves?