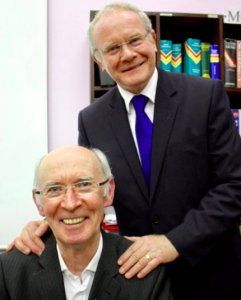 The week before last, all my energies (such as they are) were spent on launching my book of interviews The Martin McGuinness I Knew – Wednesday in Derry, Thursday in Belfast, Friday in Dublin. My thanks to those good (and intelligent) people who found time to attend one of the launches. It was a delight to meet some of you and have a chat, however briefly. As it was yesterday, when I did a signing session in Omagh.

I’m impressed (but not surprised) that Derry media made detailed reference to the book, through newspaper comment and BBC Radio Foyle coverage. Likewise in Dublin – the radio station Newstalk had an interview with me about the book, the Irish Independent did a full-page review of it. Oddly BBC Radio Ulster gave around ten seconds to the book and that was it. Odd, because I’m hardly a stranger to the Raidio Uladh/Radio Ulster airwaves – or a stranger to The Irish News, for that matter. Puzzling, eh?

In my interview with both Newstalk and Radio Foyle, there was a heavy emphasis by the presenters on Martin McGuinness’s time as an IRA leader and on IRA victims. It was as if McGuinness’s life had ended around 1994. Of course I blame myself for not insisting we stick with discussing the book, which doesn’t waste space conjecturing what Martin McGuinness might or might not have done when in the IRA. As someone said, those who know aren’t talking and those who are talking don’t know.

In the Irish Independent, the reviewer’s piece is headed “Only Half the Story” and complains that – guess what? – there is little focus by interviewees on what Martin McGuinness might or might not have done in the IRA. But even as he complains about the absence of violence-talk in the book, the Indo reviewer refers to an interview Martin McGuinness did in 2000. As usual, the “What did you do in the IRA?” question came up, and McGuinness is reported as replying thus:

“If you’re asking me, for example, did I throw a stone that hit a soldier in the head and took blood from him, or did I throw a petrol bomb at a member of the RUC, or did I ever fire a shot that killed a soldier, you know, what’s the point? What is the point of that?”

I think that directs our attention to something important about those who ceaselessly want to know more and more about Martin McGuinness’s time in the IRA. Why this insatiable thirst for detail?

I believe there are two reasons. The first is that McGuinness’s questioners hoped by asking their questions to damage Sinn Féin electorally. It doesn’t take a Stephen Hawkings to work that one out. The second reason is, I believe, the same reason coverage of that Belfast rape trial has been given in such detail on the evening news for the past six weeks.

It’s because there are people who get a thrill from hearing the details of violence and the details of sex. And the media are happy to provide material that satisfies these voyeurist impulses – from a safe distance, of course. There are media consumers who pretend to be outraged by such goings-on but in fact get their jollies from reading or hearing about them.

That’s the first time I’ve across those questions Martin McGuinness posed. My respect for his insight has just moved to a new and higher level.

View all posts by Jude Collins →
The Irish Times spoils my Saturday
Micheál Martin: doing the right thing, even if it’s for the wrong reasons