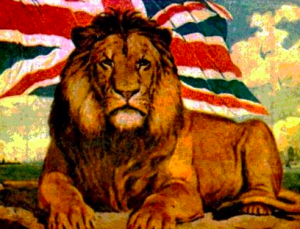 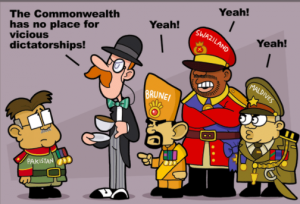 The British Empire is a bit like the Cheshire cat in Lewis Carroll’s Alice in Wonderland: over the years it has faded until all you’re left with is a bland smile.

First we had the British Empire red in tooth and claw, sailing across the globe in search of countries to plunder, taking in of course Ireland but also India, the Caribbean, Egypt, South Africa Malaya, Iran and Kenya. Among others. Where the native population tried to resist this takeover, they were met with barbarous cruelty and suppression.

Then we had the British Empire and Commonwealth, which suggested an Empire, yes, but an Empire where there was cooperation and pooling of resources rather than seizure by the strong. Then we had the British Commonwealth, which diplomatically dropped the E-word. And finally a couple of weeks back we had the Commonwealth meeting in London under the aegis of QE2, who told the assembled leaders of countries from all around the world that she was giving up being the head of this outfit and it was her “sincere wish” that her son Charles replace her.

The Commonwealth Charter of 2012 declares that each member Commonwealth nation is equal, regardless of size or wealth. But since QE2 is the Head of the Commonwealth, her “wish” has been respected and Charles has become head honcho of the international club.

Now that the UK is staggering out of the EU, some people have begun to talk about great future prospects of Commonwealth trade. Those of us with longer memories will recall that in 1973 Britain made a conscious decision to turn its back on the Commonwealth and join what was then the European Economic Community (EEC). If the once-jilted Commonwealth is a gleaming trade possibility, how come arch-Brexiteers like Boris Johnson and Nigel Farage haven’t been bleating about it rather than emerging giants like Brazil and China as trading partners?

You’ll get people – usually unionist – who’ll tell you that it would be in the south of Ireland’s interests if it were to re-join the Commonwealth. The snag with that is that the average southern citizen would rather chop off his/her nose and stir-fry it than re-join the Commonwealth club. Not all of them, of course. If you searched really hard you’d probably find as many as fourteen Commonwealth fans in the twenty-six counties who would like nothing better than toasting the health of Her Maj and to periodically getting stuck into some haute cuisine. But the overwhelming majority of southerners would prefer to urge us nordies to accept our present state and not be forever nyammering about it, while they steer well clear of any Commonwealth.

The Commonwealth exists as a visible sign of good relations between Britain and those countries it was wont to loot and pillage. You see them smiling and chatting on your TV screen and you say “Such cordiality! Verily, the British Empire can’t have been that bad – look at how friendly everybody is now.” So an unspoken version of imperial history is offered – happy natives loving their Queen, all friends now and sure weren’t we all friends all along, apart from some unfortunate misunderstandings in the dim past. The Commonwealth= the  Empire without blood and tears.

The Commonwealth also gives QE2 and her successor somewhere to go on state visits, where the local people perform traditional dances and the queen smiles and wears white gloves.

And I suppose you could argue the case that the Commonwealth provides living proof that Stockholm syndrome can apply at an international as well as a local level. Britain performed some pretty disgusting acts against its colonies over the decades, yet here we have the heads of the states where that disgusting stuff was practiced, getting up to toast Her Majesty and getting a bit misty-eyed as they all sing “God Save The Queen”.

Alternatively, you could see these periodic junkets as a toothless many-headed bulldog, gnawing its way through course after course of  rich food, with the promise that under Charles’s leadership, a hundred similar junkets will be held in coming days.

View all posts by Jude Collins →
Does being opposed to abortion make you right-wing?
Saturday pic of the week