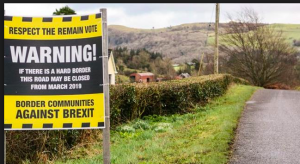 Does the DUP want a hard border? Most of us would rather not think about the answer, but it’s vital we do. Unfortunately, it seems the answer is Yes. And No.

Let’s start with No. Even the most economically illiterate DUPer knows that a hard border will make life on this island markedly more difficult. The reasons have been listed repeatedly: in business time is money, and border posts mean time, as all goods – and people- are checked to see that they have complied with the different regulations that will govern such matters post-Brexit. Dairy farming is an obvious case, but check the Belfast-Dublin Enterprise train some day – any day – and you’ll be struck by the numbers of business people discussing business, talking business on their mobile phones, getting on with business on their laptops. A hard border will mean that the train stops, these people subject to questioning, before they’re allowed to resume their journey and work. The amount of time all this will take is uncertain, but one thing we know: it will slow things down and so cost those involved money. Sometimes a great deal of money.

DUP politicians say that they favour Brexit but of course that doesn’t mean they want impediments to the economy that a hard border would bring with it. Sorry, guys. You can’t have it both ways. You’re going to have to choose between the disruption of business, sometimes to the point where businesses will go out of business, and the maintenance of the present invisible border, which is to your economic advantage.

The DUP are like the old cartoon of a caveman family crouched under a rock which looms above them and is propped up by a wooden pole with a rope attached. The mournful caveman is explaining to a passing friend: “This here is a deterrent. If our enemy tries to come into our home, I pull the rope.”

So which will win: the level-headed realists in the DUP, who know what side their bread is buttered on? Or the scorched earth DUPers, who would gladly eat grass if it meant reinforcement of their boast that they are British?

I think we all know the choice the DUP will make and it’s deeply depressing.