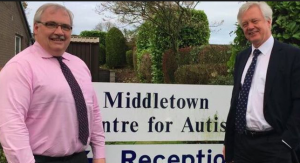 You want the optimistic view of the future? OK. In a year from now, the present state of the border – the British border, not the Irish border, as Martina Anderson MEP pointed out the other day – will be maintained. People and goods will flow without a hint of turbulence between north and south. The need for an integrated economy throughout Ireland will become increasingly obvious, and more and more people will get behind the idea of a border poll.

And the negative? Well, three former Taoisigh met in the Mansion House in Dublin yesterday and told us what some of us knew, and a little bit of what many of us know is semi-bunkum. The Taoisigh were Bertie Ahern, John Bruton and Brian Cowan. Bertie Ahern warned against the border – the British border – being left to the last minute, when all other UK-EU matters had been dealt with. In that case, Ireland would be under enormous pressure to accept what it might not want, like a hard border. That is indeed a danger so close, we can feel its hot breath on our collar. Bruton for his part saw a hard border as undesirable: “We know from history that the existence of border posts symbolizes the partition of the country – something many people find hard to accept”. Nice understatement, John. Unfortunately you then go off half-cocked and warn of an upsurge in smuggling, which you claim is closely related to paramilitary activity and criminality. John old pal: smuggling that has nothing to do with paramilitarism has gone on since the border was established nearly a hundred years ago. My Auntie Peg’s pot of jam hidden in her knickers had less than  nothing to do with paramilitarism.

What Bruton should have said was that republican paramilitaries would be drawn to the border like flies to a cow’s rear-end. What’s more, they wouldn’t have to do very much. No need for what was once termed “a spectacular”. One attack on a border post with one border guard wounded would be headline news around the world. Violent dissident republicans would get the maximum publicity for the minimum effort, and something tells me  they would be putting a bit more than minimum effort into border attacks. It’s hard to believe the British would be so stupid as to play into the hands of these paramilitaries, but who knows? They ‘ve been stupid before. And of course the DUP would be quietly or more likely noisily pleased: republicanism would have been drawn back into military conflict, making everything so much more simple,  so much more black and white.

Will the EU stand by Ireland and refuse a deal of any kind if the Brits having nothing to offer but a hard border? They will if Ireland north and south doesn’t yell loud enough and insist on a border solution written into law long before next October.  Better to yell now than descend into  economic and political chaos further down the road.