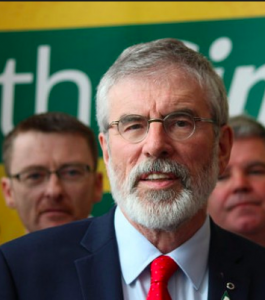 ‘Strewth. I’ve just come off the Nolan Show on BBC Raidio Uladh/Radio Ulster, where the hot topic of the day was Gerry Adams’s answer to a question from a German journalist: “Is violence a legitimate means with which to reach one’s aims?”

Adams’s reply, predictably, was Yes, in circumstances such as those in which the nationalist/republican community found itself when it tried to march for civil rights. Mike Nesbitt came on and cited a list of IRA killings to show that Gerry Adams was wrong. Stephen Farry of the Alliance party came on and said that using violent means to achieve political ends was reprehensible.

And me? I said  I believe firmly  that it would have been astonishing if Gerry Adams had said No. Did anyone expect him to disown the entire IRA campaign of the Troubles? And it’s not just Gerry Adams who believes violence is a legitimate way of attaining one’s political objectives.

As I pointed out to Stephen Nolan – a point that was ignored – this NE state in which we live came about because Lloyd George told the Irish negotiating team that if they didn’t sign up to partition, there would be “immediate and terrible war.” How’s that for legitimate violence? In 1912, some of the Ulster Covenant signatories signed their names in blood, to show the strength of their determination to resist, by any means necessary (cue the blood signatures) to resist Home Rule. How’s that for legitimate violence?

And of course all states which have an army –another way of saying all states – believe in the use of violence to achieve political ends. Why else go to the massive expense of buying or manufacturing weapons and training young men – and women – to kill? What’s more, just about all of us support them in this threat – a threat that often becomes a reality, as in Iraq and Afghanistan – when we pay our taxes. We literally provide financial support for the equippint and training of the state’s Armed Forces.

When I mentioned this, Stephen Nolan told me it was ridiculous. He didn’t say why, he just said we were talking about Gerry Adams.

A final point. Nolan suggested that Gerry Adams should be asked if Sinn Féin now renounced violence as a means to achieving political ends. I think it would be more apt if all the leading politicians in Ireland north and south, and the British government, were asked if they renounced the use of violence to achieve political ends. And before they gave their answer, they should be strapped up to a lie detector. If that happened, the electricity surge would be such, there’d be power losses the length and breadth of these islands.

Footnote: when I suggested on Nolan that those who chose not to engage in violence during the Troubles here might, in many cases, have done so not because they were pacifists but because they were afraid, Stephen Parry got very indignant indeed and said I had insulted all the people who had refused to engage in violence because of their principles. Right. You really believe that, Stephen? Here, let me strap you up to this lie detector first.

View all posts by Jude Collins →
The Irish Right to Sovereignty and Unity  by Joe McVeigh
Weapons, motives and spineless media