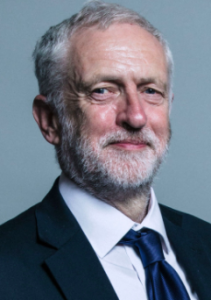 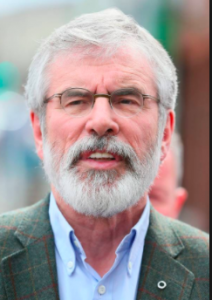 I doubt if Gerry Adams and Jeremy Corbyn find time to get together these days, but if they did, they’d have a fine old time comparing assaults made on them by the media, and the different forms which those assaults took. Gerry Adams, as you probably know, has been accused of protecting paedophiles, protecting murderers, being in the IRA and having the cheek to stand in Louth and top the poll. Oh, and wearing a beard.

I’m not sure if Jeremy Corbyn has been accused on the beard front, but he’s suffered aggressive headlines on pretty well every other charge. He didn’t have what it took to be a leader, he didn’t agree with his fellow Labour MPs, he supports Momentum which keeps signing up new Labour Party members, he supported the IRA. And now he’s anti-semitic.

The latest anti-semitic action of Jeremy was to attend a meeting with what the media invariably refer to as a ‘fringe’ or ‘radical’ Jewish group called Jewdas. This is not to be confused with the mainstream and unradical Jewish group which has refused to meet him except he does what they tell him first. The comedian David Baddiel took aim at those who dismiss Jewdas as somehow micro and extreme. Baddiel  didn’t hit the wall:

“No it isn’t [radical] . They are just Jews who disagree with other Jews. Which means: Jews…To make out that it’s somehow anti-Semitic for him to spend Seder with them just because they’re far left is balls.”

But if Corbyn  isn’t anti-semitic, why all this fuss and claims that he is? Maybe the answer is contained in this on-line posting yesterday: 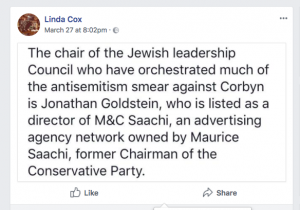 When the Establishment want to get you, they’ll send their proxies to work with the instruction “No holds barred” – another experience both Corbyn and Adams share.  Let’s hope the mud-slingers sprain their arms and necks.