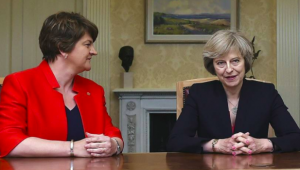 It really does get wearisome talking about Brexit, doesn’t it? It’s as if all the other things happening in the world – Trump, North Korea, the conviction of Bill Cosby – weren’t happening. But like dealing yet again with a time-consuming teenager, we have to keep returning to it.

The latest from the DUP has been voiced by Nigel Dodds, the non-leader of that party. He says that if Britain keeps the north-east of Ireland in the European customs union, he and his band of merry men will bring down the British government. To which there’s a terrible temptation to respond with “Make my day, punk”. Were the DUP  to turn their threats into actions, and were there then a UK general election, (i) the chances of the DUP holding the balance of power are slim to nil; and (ii) the chances are Labour would win the general election and Jeremy Corbyn would be British prime minister, a result which would have DUP politicians plucking out their eyes and dancing on them.

On the other hand, if the Tories were to do a U-turn and do the sensible thing – stay in the customs union – would the DUP bring down the government? I think not. Their focus is not on the benefits or otherwise of being in the customs union, their focus is on staying British, which gets harder every day. On the one hand they have Theresa May who would dearly like tot disown them and the north-east of Ireland as a foolishly conceived and misshapen orphan. On the other hand, to their rear, they see the south as plotting to swallow them up. And in the body of the north-east state itself, they see this great tumour of Catholics growing, with every prospect of killing the NE state by 2021.   Sometimes it’s hard being a DUPer.

Maybe it would help if they tried , to separate paper tigers from the real thing. Leo Varadkar and Simon Coveney are as much of a threat to the north-east as Arlene Foster is a threat to the world’s crocodile population. On the other hand, the demographics here are literally a growing threat. When all the linguistic musical chairs have ended and all the  talk of “A great number of Catholics really like living under British jurisdiction” and  “Northern Irish on their census forms mean they’re for partition” , and people putting “Londonderry” on their job application forms means they just love London jurisdiction here, the referendum choice will come and the moment of truth will arrive. The Scots may have recoiled from the prospect of cutting free from Mother Britain. But the Scots are not the Irish. Not by a long sectarian chalk.

So don’t worry about Leo and Simon, guys. Worry about getting a gerrymander in place before that demographic wave drowns you.

View all posts by Jude Collins →
Diane Dodds v petulance and bully boys
Does being opposed to abortion make you right-wing?