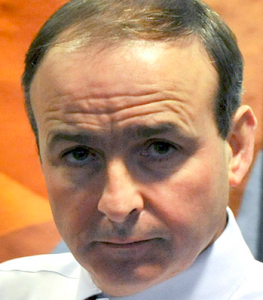 Sometimes I look at or read about Micheál Martin and feel sorry for him. He has such a furrowed-brow face and his words gush out in such musical spurts, it’s hard to believe this is a man at peace with himself. And he has his reasons for being anguished.

There is, of course, his altered views on the need to keep the Eighth Amendment. Micheál, unlike Leo, was agin repealing the Eighth; but then he did some serious reflection, he says, and  realized he was for it. Repeal of the Eighth. It was difficult, but he has now seen the light.

Add to that Brexit, coming rumbling down the line at us. Most people are in agreement that Leo and Fine Gael have done a good job in standing up to Britain (with EU backing, of course) about the need for a frictionless Irish border. But in today’s Irish Times, Micheál is critical of the Taoiseach’s party and its stand on the border.

Micheál imagines himself in Leo’s shoes: if he had been, he’d “have kept better channels open to Britain”. Which is another way of saying that Leo and Co have stood up to the Brits just a bit too much.

Not just that, but Leo has let the Brits off the hook.

“If the original strategy was that Northern Ireland had to be sorted first, so the island of Ireland has to be sorted before we get into the next phase, the transition and the overall agreement, what has changed?”

I’m going to say something I don’t know that I’ve ever said before: you’re right, Micheál. It’s patently obvious that you are clutching in all directions to find fault with Fine Gael and to pretend you haven’t been keeping Leo’s lot in power since the last election. Most of the arguments you advances are half-baked, such as Leo being not hard enough and at the same time not having close enough contact with the British. But on this one, whether by good judgement or good fortune, you’re correct.

We were assured many months ago that the Irish border was one of the sticking points in UK-EU negotiations, and that until that matter  was sorted, there’d be no progress in UK-EU talks. Last December and more recently, that determination has been expressed – no progress without sorting the Irish border – even while the UK and the EU are merrily trundling on with trade talks. Mind you, Gerry or Mary Lou may have pointed this out before Micheál, but that’s not the point. The point is that, whatever his motives, Micheál has put his finger on a very important point: the frictionless border question was  supposed to have been resolved before further UK-EU progress in talks, and it hasn’t been.

And that’s dangerous. Very dangerous. Because if the UK and the EU get everything else sorted, do you think that they’ll allow a pesky Irish border to prevent them signing on the dotted line? No chance. They’ll waffle around it and leave us with the thing the DUP long to see: a hard border in Ireland.

Sometimes people do the right thing for the wrong reasons. I’m cynical enough to think that Micheál is concerned about the border because he’s concerned that Fianna Fail could be punished by the southern electorate for being so comfortable in its confidence-and-supply position with Leo’s lot. But by pointing out that trade talks are continuing without a resolution of the Irish border situation, Micheál has done the state some service. As well as himself, of course.