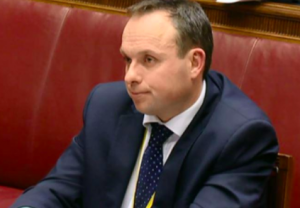 What manner of man is Andrew Crawford? Well, he was a prominent DUP adviser and I’ve read somewhere he has a doctorate in agriculture, though I can’t vouch for that. But I can vouch for the fact that he passed on information to his cousin Richard Crawford, who happens to be a poultry farmer. So what information did the good Doctor pass on? Why, information about the RHI scheme. Information in the form of an internal document which had not yet been released to the public. At a meeting of Stormont’s Public Acouunts Committee, a senior civil servant is reported as saying that the good Doctor had “exerted his influence to keep the flawed Renewable Heat Initiative running.” Dr Crawford handed in his resignation as a special adviser to the DUP within twenty-four hours of the announcement of an Inquiry being established to explore the whole RHI debacle. What’s Dr Crawford doing these days? Well, some part-time research work for…you guessed it. The DUP.

What Dr Crawford did is not what is sometimes referred to as insider trading. Insider trading is when someone involved in trading stocks and shares uses information which that individual has access to and the general public don’t have. Yes, Virginia, there is a difference. Dr Crawford passed the information to his cousin, he didn’t use it himself. Actually, Dr Crawford told the inquiry that his cousin Richard had asked him for information about the scheme and he had emailed him a document that hadn’t yet been released to the public. But Dr Crawford insists that cousin Richard “in no way” got advantage from this. Cousin Richard installed an RHI system with his poultry within twelve months of getting the information.

Now. Dr Crawfod admits that he shouldn’t have released the information he did, and he has apologized. We have the word of his party leader that she didn’t believe he should be banned “forever and a day” from doing valuable work, such as the part-time research he’s doing for the DUP now.

Just five  points about this matter involving the good Doctor: