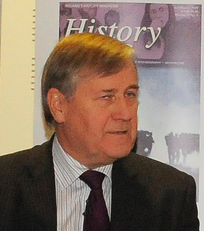 I once met, briefly, the Rev Brian Kennaway. He struck me as a cheerful and intelligent man. However, his claims in yesterday’s Irish Times that the Good Friday Agreement was undermined by   Martin McGuinness mentioning to some schoolchildren that he had once been on the run is laughable. A bit more serious is his claim in the same article that “those who supported the agreement did not think for one moment that Sinn Féin would ‘keep the pot boiling’ with their constant glorification of the terrorist past.”

This second comment – “glorification of the terrorist past” goes to the heart of the Good Friday Agreement.

The Agreement was made between differing traditions in the north of Ireland, and as Senator George Mitchell pointed out yesterday at Queen’s, in its preamble it speaks of equality and respect.

And as they differ in terms of future hopes, they differ in perspectives on the past. Unionists like Rev Kennaway see the past, and specifically the years of the Troubles, as the product of bloody terrorist action. Nationalists and republicans see the past as the denial of civil rights, police violence against civil rights marchers, and British army contempt for innocent Catholic/nationalist life. In Martin McGuinness’s famous words, the war came to them, not the other way round.

Respect for difference – that’s what the Good Friday Agreement was about.

Here’s the link to the irish Times article

View all posts by Jude Collins →
Weapons, motives and spineless media
Defend the Good Friday Agreement! Now excuse me – my armed forces have a date with Syria