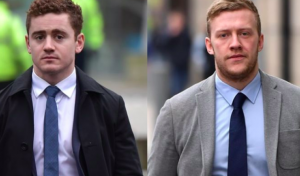 Plus. On what grounds are players chosen for Ulster, or Ireland, or the British and Irish Lions (God I hate that term) or any other rugby or sporting team? On the grounds of what they’re capable of doing with the ball; how clever, efficient, game-winning they are. If they’re being sought by the police, you might hesitate about putting them on the team-sheet. But apart from that, the job of team selectors is to choose the people who play this particular game best. If you’re going to start stumbling into whether their morals merit their inclusion, you’re stepping into a bog filled with complications, not to say injustice.

But maybe what you want to talk about is the question of rape trials and anonymity? Of course Paddy and Stuart shouldn’t have been identified, even as the young woman who accused them was not identified. Their sexual conduct was a long way short of admirable; but they’re entitled to keep that to themselves, providing they’re not breaking the law. Think about it. How would you like your sexual life paraded before the world? If you wouldn’t, then no matter what you are charged with in this area, you have a right to keep it to yourself. In fact, the graver the charge, the more need for anonymity.

Not just that. Besides having a right to keep your private affairs private, you are entitled to keep your job. If you were a painter, would you think it fair that nobody bought your paintings because you slept around? Are Harvey Weinstein’s movies less good, because he’s been revealed as a sexual bully? Are Hemingway or Updike’s novels less worthwhile, now that there’s outcry about their treatment of and views on women? Many artists, musicians, painters, actors, are totally stinkers in this area. That doesn’t mean they’re incapable of producing great or good art. Two different areas.

“Oh but here”, you say. “These rugby players, Messrs Jackson and Olding, are admired by our young people. They are role models. That means they should live lives that young people can admire.” That may be the case – that they are seen as role models – but the young people doing the admiring need to be put wise to the fact that we are measuring football or rugby skills when we call these people good or great, we are not judging them as ethically good or great. We go elsewhere for that – to those who live self-less lives working for justice and/or helping those in need of help. Maybe even to human rights lawyers. But we don’t or we most certainly should not confuse the sports skills with moral standards.

But. But but but. After all this weighing up of sporting quality and moral squalor, the whole house of cards gets collapsed as the deciding factor appears at the door: Money. Or to be more precise, the Bank of Ireland. Yep, the organization that got all that public money a while back. It’s so ethical, it can’t afford to be associated with either of the rugger sluggers. Money talks, and it’s saying Goodbye, Paddy, Goodbye Stuart.

View all posts by Jude Collins →
Oh Doctor, you’re in trouble…Or maybe not
Abortion: nine questions that baffle me