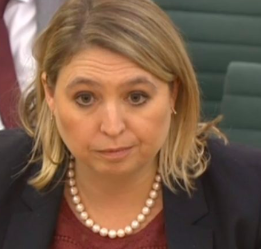 The Brexit debate has released a tsunami of irony which is in danger of drowning us all.

If you’ve not been living in an octupus’s garden you’ll know that Arlene Foster is very fond of the UK. The other day she drew a shimmering picture of the outward-looking, multi-ethnic, twenty-first century desirability of it all. And the thought of there being even a border check between our  little NEN and ‘mainland’ Britain has raised DUP hackles very high: this will not pass, they tell us. The UK is so good for us here in the north.

Unfortunately, there’s been a clash between the shimmering dream of the UK and the hard reality. For example, the UK for reasons best known to those who voted, wishes to leave the EU. That includes leaving the customs union. British Secretary of State Karen Bradley has told us that for the UK to stay in the customs union would breach UK government red lines and prevent the UK from having an independent trade policy. Unfortunately for her, there’s a gulf of difference between the UK and the people of our North-Eastern Nest: we see the economic world differently. At last count, over 60% of people here want to remain in the customs union and the single market after Brexit. So what the UK wants – or to be more exact, the Tory Party wants – and what we in the north want are diametrically opposed.

This puts the DUP in a very uncomfortable position. It can point to the benefits of being in the UK, it can talk about the referendum having been a UK-wide one, but when all is said and done, the people in the north – nearly two-thirds of them – want something very different from what the DUP is going to help the Tories give them. That’s a dangerous game for a political party that courts votes.

Sooner or later – almost certainly sooner – people here are going to twig that there is an alternative. The old standard answers about the £10 billion annual subvention from Britain are beginning to look a bit thin as we stare into what looks more like an economic desert than a shimmering dream. Sooner or later people are going to see that the south, which is in the EU, is doing around three times as well economically as we are, as part of the UK. And don’t forget, we’re still in the EU. Not for long, of course, but still in it. So if the contrast between the economy of a state in the EU (the south of Ireland) contrasts so sharply with a state that shortly will be outside the EU, because it’s shackled to Mother Britain by some swivel-eyed Brexiteers, people here are going to cast around and wonder “Is there an escape hatch from this economic hell?”  And lo and behold, there it is, staring them in the face: hopping into the EU alongside the south and letting Mother Britain go stumbling towards the cliff face, if that’s what she really wants.

Northerners have a reputation for being hard-headed business people. If they allow themselves to be tied to an economically-illiterate UK, that reputation is going to be dynamited out of existence.

Of speeches, flags and explainers
The early purges