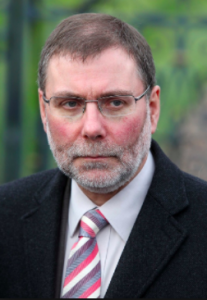 Oh dear – nother day, another conversation with Nelson McCausland on the Nolan Show. Despite temptations not to, I like Nelson – in fact I exchanged a few pleasant words with him in the Linenhall Library earlier this week. But when he gets on the airwaves, he really does talk some poppycock. Maybe he knows it’s poppycock and goes on speaking it just the same. Or maybe he believes it. Either way it’s poppycock.

This morning he was on talking about Jeremy Corbyn and the appalling fact that he had, in the past, republican sympathies, that he believed in a united Ireland, that he met with Irish republicans. Pretty awful, eh? The fact is, Jeremy Corbyn and a  number of other people, including Fr Alex Reid and John Hume, talked to republicans during the Troubles. Why? Because they knew that republicans were engaged in violence as a last resort – there seemed no other option. The way to keep the violence going was to stay well away from those thus engaged. The rational – and courageous – thing to do was to talk to those thus involved and work with them to achieve conditions where they felt they could pursue their objectives without resort to violence.

Colum Eastwood has said t he thinks victims should not be used by politicians. I couldn’t agree more. But one of Nelson’s objections to Corbyn was that he attended a ceremony commemorating some IRA men who had been killed. Why raise the past and denigrate one section of people, if you’re not intent on furthering your political career on the back of past violence and those who suffered?

Near the end of our discussion, a man rang in telling me that I claimed victimhood for dead republican paramilitaries. The fact that I had made no such claim didn’t seem to bother him. But when I asked why so many hundreds, perhaps thousands of young men and women engaged in violence during the Troubles,  the answer was ‘They had a choice’. Which of course was a way to avoid answering my question about why so many resorted to violence.

Except you believe that a communal blood-lust suddenly descended on hundreds of young men and women, driving them to go out and murder people, you have to accept that the experience of Catholics in our NEN for the first fifty years of its existence, was one of blatant gerrymandering and discrimination, which was followed by violence at the hands of British soldiers and the RUC. As Paul McCartney sang in his (quickly banned) song:

If on your way to work

You were stopped by Irish soldiers

Would you lie down, do nothing,

Would you give in, or go berserk?”

As a British subject, I wonder what Nelson would have done in the situation sketched by McCartney?